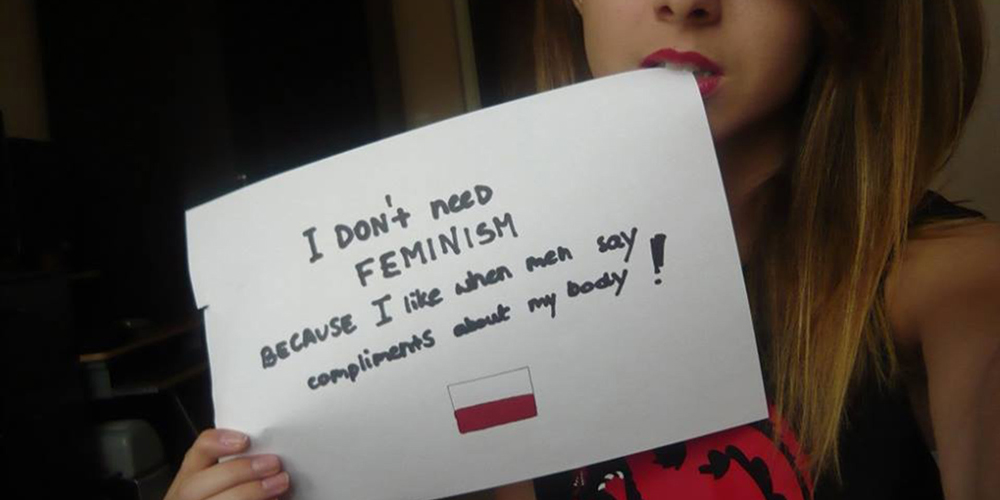 When GGG started one of my goals was to open discussion on what I personally saw as a distortion of what feminism means. Looking at the media and speaking to other women I felt that in the decades since our mothers burnt their bras the movement had been boiled down to the point where for many people only a sticky syrup remained.

As young women in a wealthy country many of our day-to-day struggles for feminism are diminishing—note not gone—and one can forgive women for feeling disconnected from it. Without going into the larger argument that gender equality is still a dream not a reality, and that the struggle now is being waged in the developing world, the #womenagainstfeminism movement reminded me of how much work we still have to do at home.

Personally I don’t have a problem with the declarations that some women want to feel sexy, bake a pie, or land a husband. Because as I’ve lamented many times on this site—okay and perhaps over a bottle of wine—what you do with your life and body is your choice. If you’re in a loving supportive relationship and want to show appreciation for you partner by cooking a steak dinner it’s no business of mine. If you feel empowered in your choices and choose to stay home and raise your kids go for it. After all, no one has to live in your life except you, so if you’re making informed decisions for yourself then all the luck in the world.

Rather what bothers me about the movement is two-fold: firstly it’s a basic misunderstanding of what feminism is about. Feminism isn’t hairy legs and combat boots. They’re choices individual women make about their own bodies, not dissimilar really to painted nails and make up. Feminism is, sorry to repeat myself, about choice and self acceptance. It’s about being free to live your life the way you choose, away from gender expectations and oppression. Personally, once a woman fully realises that and is secure in herself I see the battle as won—you can wear whatever you want.

Secondly, and perhaps most upsettingly is how these women are viewing themselves and the movement through the male gaze. The constant fear that people will think they hate men or judge them for loving a man is misplaced. Men do have a role to play in feminism: respecting women, raising strong daughters, and breaking through their own gender behaviour boundaries. But when a woman is considering what it means to be a feminism in her own life men should be as far away from her thoughts as possible. If you’re a vegetarian you don’t hate cows, you just adjust your relationship with them. Sure it’s not a water tight analogy but it’s true, to be a feminist isn’t to swear off men it’s to shift your own gaze from one informed by a male world to a female one.

It’s for this reason I’m always surprised by how much men fear feminism. If they’re living their lives in a respectful way, the empowerment of women shouldn’t cause a ripple of change in their day. Apparently this fear is present in women too, and I can’t help but wonder if these women who oppose feminism are worried about displacing or upsetting a man. Feminism isn’t about men, and anyway, the nice guys shouldn’t be affected by it anyway.

Ultimately though I don’t condemn the women whose beliefs are so different from my own, because my favourite part of gender is debate and exploration. But I will say if feminism is about strength, expression, and questioning your own role in the world then in a strange way these women are fitting the bill perfectly. I just wish they’re reconsider some of their definitions.

“Hi, I’m Hannah and I like: Ghost World”. Thanks to social media I’m never lacking in things to like, but when it comes to…