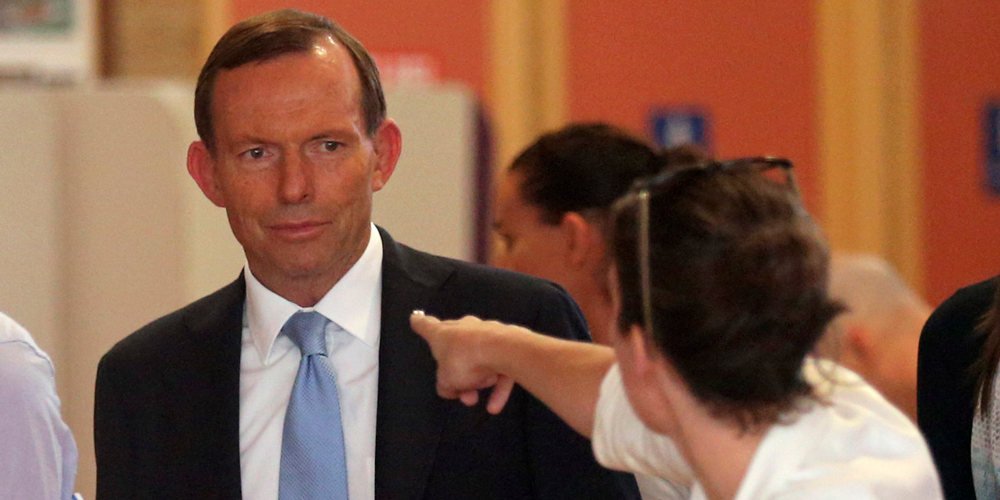 One year ago, Australia appeared to be on the cusp of breaking into a new and exciting political era, with women at the frontline. The nation’s first female prime minister, Julia Gillard, whose inner ministry featured six diverse women, led the Federal Government. It was a fresh, contemporary line up, perhaps a glimpse, many hoped, of a new trajectory for Australian politics and women’s civic involvement. Fast-forward to today and a very different image emerges: the current Government under Tony Abbott has a deeply regressive attitude towards gender equity in politics. Upon forming Government, Abbott elected one woman to his 19-person ministry and curiously awarded himself the role of Minister for Women. When time to replace the nation’s first female Governor General, Quentin Bryce, he did so with the former Australian Defence Force chief, Peter Cosgrove.

When Abbott ascended to power he informed the electorate that “the adults are back in charge.” And by adults, he meant white, conservative, middle-aged men. If the key measure of women’s empowerment in society is their participation in politics, then Australia at present has taken a patriarchal turn for the worse.

It is not just the halls of Parliament House that are dominated by men. Abbott has established a plethora of advisory groups to conduct independent reviews, which are dominated by white, conservative, middle-aged men. The National Commission of Audit is being overseen by Tony Shepherd, who is, you guessed it – old, conservative and white. A national curriculum review is underway and is chaired by fellow old, white male, Kevin Donnelly, a former Liberal party staffer whose conservative agenda was revealed when he expressed concerns that the ABC’s Play School was attempting “to normalise what many parents would consider unnatural behaviour” by “promoting the lesbian lifestyle.” Similarly, Maurice Newman, also old and white, heads the Business Advisory Council while climate change sceptic Dick Warburton is overseeing the Renewable Energy Target.

Not surprisingly, the policy discourse in Australia is dominated by the vested interests of white, middle-aged, conservative men, who are now effectively making decisions that influence women’s lives. This paired with the Prime Minister’s astonishing track record of sexist comments, is a troubling prospect indeed. The lack of women’s knowledge and insight in leadership, advisory and decision making roles means that the nuanced and differentiated interests of 50 per cent of the population now run the risk of being overlooked.

The recent budget announcements illustrate perfectly the disproportionate negative influence policy can have on women. For the first time since 1984, the budget will not encompass a Women’s Budget Statement, which was established as an equity instrument to identify initiatives for women. As a result, single, low-income earning and unemployed women with children are set to bear the burden of the proposed budgetary cuts to welfare and the introduction of a GP co-payment. University fee deregulation and the increase in interest paid on HECS debts too will unduly hit women the hardest; women not only continue to earn 17.5 per cent less than their male colleagues, but also over their careers, take time off to raise families, which will cause their HECS loans to skyrocket.  A report by the National Tertiary Education Union found that the proposals to higher education have “a built-in bias against graduates with carer responsibilities, which will mainly be women.”
Given these dire prospects, an obvious solution often floated by commentators is the introduction of gender quotas to ensure that women are equally represented in all levels of Government. At present, the Australian Labor Party (ALP) has an affirmative action policy in place that requires women to contest 40 per cent of winnable seats; the Liberal party, on the other hand, has no requirements regarding the number of women who contest seats at a federal election and relies on a ‘merit-based’ selection procedure. This process overlooks the systemic institutional barriers and ingrained gender discrimination women face when attempting to participate in public life.

Interestingly, equal gender representation in politics does not necessarily produce a more democratic and inclusive system that eradicates sex-based discrimination. The mere presence of women in parliament does not always result in the production of a feminist policy discourse; in fact the opposite can transpire when women who are anti-feminist assume leadership roles and actively work to maintain the patriarchal status quo. The federal Assistant Minister for Women, Senator Cash, is a case in point, and recently sought to play down the relevance of feminism, claiming the movement to be a “set of ideologies from many, many decades ago now.”

All of which highlights just how important feminism still is today. As a society, we have a long way to go in order to maximise women’s involvement in all areas of life. Increasing the number of women in parliament will not alone enhance gender equality; what is required is a seismic shift in the way gender is constructed, taught and performed so that women are truly valued as equal members of our society.

We always knew our Canadian pal Alisha Davidson made zines, comics,  awesome illustrations (the dogs are our favourites), and generally cool quips about daily life. But…