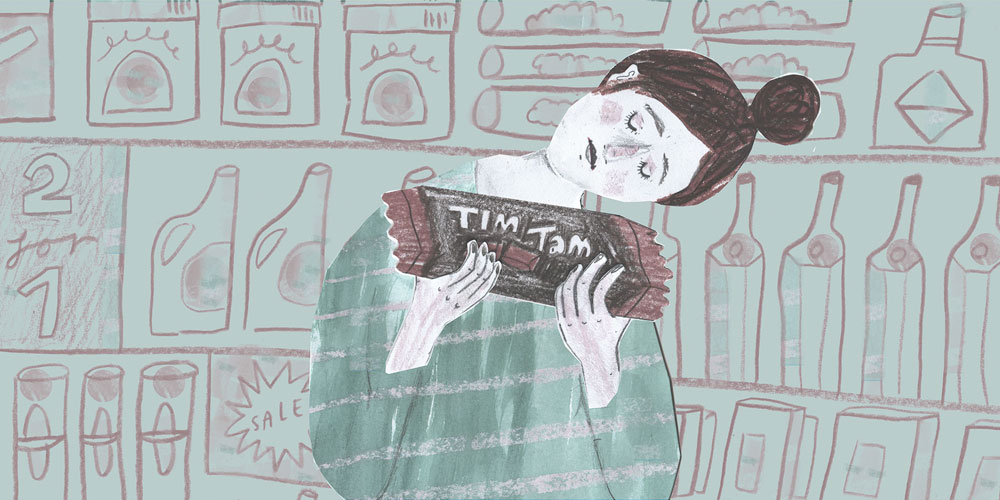 It’s no secret that we’re big fans of writer Ella Mittas and illustrator Molly Dyson, so we’re stoked to follow up their recent collaboration with a new original piece of work.

Sarah watched Cass play with her phone as they walked down the biscuit aisle. She sighed. ‘Go on, what’s the update?’

‘Like you haven’t heard that before,’ Sarah said, reaching in, picking up the biscuits and putting them back on the shelf.

‘What really kills me is, it’s not that he doesn’t care about me or like me. I can tell he does, he’s just pretending not to.’

‘Babe,’ Sarah said, throwing a box of Vita-Weets into the trolly. ‘Regardless of if he cares about you or not, he’s treating you badly.’

Cass sighed. ‘He said he has one and a half girlfriends.’

‘No, I’m the half. Don’t laugh! He’s still seeing that other girl. You know he asked me what I thought of her the other night?’

‘I don’t know! And I got all weird and defensive and said that anyone who went and got a fringe at her age was just trying to look interesting.’

‘I didn’t know what to say, I freaked out! Why does he have to do that to me? He’s just playing with my mind. He told me he thought you were hot, you know?’

‘He tells you about anyone he thinks is hot.’

‘Well he was messaging me all day yesterday and I said to him; you have to stop contacting me all the time if you don’t want to see me, it’s really upsetting me. And he said, it’s nice it means I’m thinking about you. So I said it’s unfair for you to keep stringing me along.  Then he said “you just want to be treated like a fucking princess.’’’

‘He sent that to you in a text? What did you say?’

‘I didn’t say anything, it made me so angry. Why does he have to be such a prick, he puts in so much effort to make me feel bad about myself.’

‘You need to let him go. He’s not going to change. You two have been seeing each other for a really long time.’

‘I genuinely don’t know what to do. The thought of not speaking to him makes me panicky. But then yesterday, I was walking down the street and I thought I saw him outside the pub. I felt like someone had punched me in the stomach. Turned out it was a very tall lady, but it made me so anxious. Why cant he just get sick of me and leave me alone.’ Cass whined.

‘Stop trying to put chocolate in the trolly.’

The Assisting Minister For Women Doesn’t Believe In Feminism

When Tony Abbott became Prime Minister females everywhere shuddered. His grimy past and “boys club” attitude had us worried from the outset, and it…