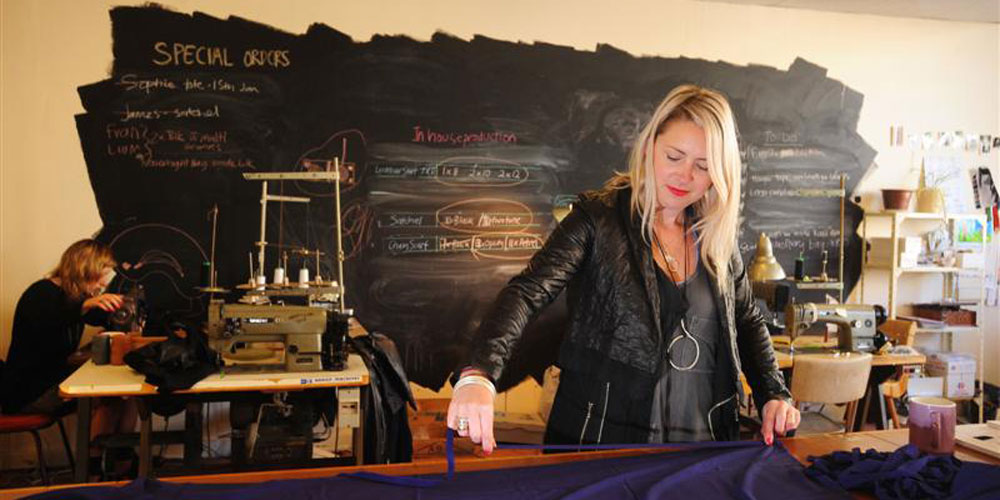 After working for six years as a design assistant at NOM*d, Sara Aspinall (now Munro) created her own label called Company of Strangers. I sat down with Sara in her new Dunedin store and talked business.

GGG: Company of Strangers is a pretty multi faceted label, how did that evolve?
Sara: The company started with bags and jewellery. Then in its second season, I did a small range of clothing which is now our main line. We started up a second line called Strange Life because we felt there was a lack of high fashion brands that were price point orientated. There’s heaps of fast fashion like Glassons but there’s nothing made in New Zealand that’s under the price point of $300. It’s hard to keep things in New Zealand and keep the price point down.

Why is that?
We pay people more than 20 cents an hour in New Zealand. Let’s say we make a dress. You have to pay your manufacturer between $50 and $80 per piece and then you’ve got to take into account your silk and imported fabric costs. By the time you’ve finished you might be paying $150 for pure costs without marking up the price. But you could get the same product made in China for $20 or $30.

Is it an ethical choice?
I think so. I’m not saying that I’ll never make anything overseas, some countries make things better and our economy is causing factories to close. Also we don’t have the skills anymore—nobody wants to be a machinist, although I’d rather be a machinist than a cleaner. There are some agents who are actually New Zealanders who own factories in China. So a designer can go there and see if all the working conditions are okay. But I’d rather keep manufacturing clothes in New Zealand because it creates an industry. I also like visiting our manufacturers if they have problems.

Okay, so I’m wearing this grey t-shirt and it cost $100. What’s your argument for simple clothing being pricy?
We do have t-shirts that cost $160 and if a customer doesn’t like it—don’t buy it. Someone could buy a really cheap t-shirt that’s made in China, but you know what? After three washes, that t-shirt is going to fall apart. It’ll get holes everywhere and it will twist and shrink.

I’ve heard about this really weird trend of totally buying out certain items at stores, not really to wear but I guess to limit their popularity. Is that legitimate thing?
Yeah, there are people like that. With fashion, especially designer clothing, there are some people who buy clothes to make a statement of status. There’s one person who is an out-of-town shopper who will buy every size 8 we have of a particular garment. Then she’ll go to every store in the country to get that size 8 piece so nobody else can get it. Sometimes she’ll buy out the size 10s as well so she has them all.

Okay, crazy behaviour like that aside: What is your most memorable fashion moment?
A stylist was shooting The Kills for NO magazine and she was using one of my first jewellery ranges. The Kills really liked the pieces and wanted to keep them and I was like “Give it to them! GIVE IT TO THEM!” That kept me going for two years. Actually, I’m still going off that.

Also, when I was working for NOM*d we made these vintage bloomers shorts which were gifted to Madonna (my childhood idol, but she’s a bit naff now). I later saw a picture of Madonna wearing those shorts—I actually sewed those pants because they were samples and I kept thinking “THOSE ARE MY PANTS!” The funny thing was, she must have liked them so much that she had someone make other ones with the exact same cut in different colours. We were thinking, “we didn’t make those shorts in that colour!” And we realised, “OMG Madonna ripped us off! Aaaawesome.”

That’s awesome. Have you noticed much of an effect on the fashion industry due to bloggers?
Definitely. At NZFW last year I was talking with my PR about guest lists and they were saying, “Okay, well, we’ve got to have this many seats for the bloggers …” Even doing the model castings I was like, “who are all these people floating around in the background?” And it turns out that they were bloggers. There are just so many. Blogging is becoming the magazine industry but I still like buying magazines … there’s just so much content out there my head actually hurts. I wonder if it’s possible to do anything new anymore.

Thursday Sunday is the dreamy fashion line from best friends Mara and Iris. Since 2009 they’ve been making easy effortless pieces for cool girls…