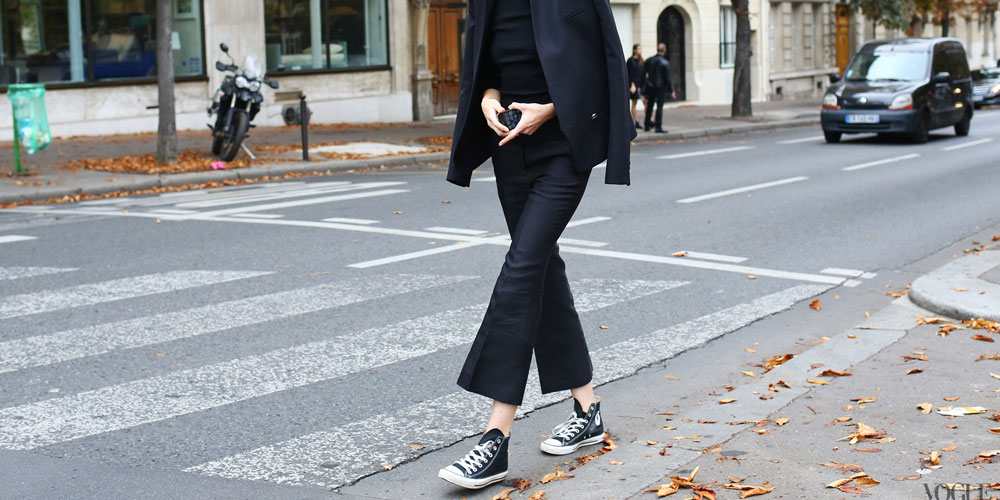 With the prodigal return of the Birkenstock this year, I doubt I was the only one feeling uneasy with 2013s fashion priorities. If sartorialists could so quickly embrace the mother of all things ugly what else could possibly sway our fickle style?

Enter the bootleg. At the conclusion of the recent month of Fashion Week this micro trend kept subtly popping up in street style blogs around the globe.

Obviously the first reaction is to recoil in eighth grade horror, but after a few very convincing bootcutted outfits it becomes increasingly hard to ignore the lure of the 2000s.

Rather than an all-out hippie movement, the most recent interpretation of the style takes subtle influence from our new millennium’s tricky early years. Obviously you can’t ignore the references to the 60s and 70s, but rest assured it can be done without a hint of turquoise in sight.

This isn’t the first time the infamous flare threatened to worm its way back into our hearts. A couple of years back it looked like they were teetering on the edge of attainable fashion; but the cues were taken from models like Abbey Lee and Erin Wasson who live by the “more is more” rule. Bellbottoms hit mainstream stores, but we were drowned in lace and told to wear it with a band tee. Hey I’m nostalgic for middle school too, but not that nostalgic.

This time the trend has been ushered in by high-end editors who only ever venture out during Fashion Week. The latest spin is proving to be much more refined: neutral colours, sharp silhouettes, and free of garish patterns. If ever there was a time to implement “keep it simple” it’s now.

Before you go looking for your Mytiko pants, be warned: quality is everything when it comes to bootleg pants. Under no circumstances will there be any V fronts or ribbed fabric if people are going to give them the chance they perhaps deserve. And you can’t argue with results. Despite what all those mom blogs try and tell you bootleg jeans do give you a great ass, skinny thighs and long legs.

If you’re still not convinced and want to see where everyone is coming from, watch Charlie’s Angels: Full Throttle to really take you back. Actually, you could pretty much put on anything with Cameron Diaz from that era and the storyline will be her walking around in different pairs of flared pants. That’s what I took away from the Sweetest Thing anyways. That and that 2013 movies don’t have enough montages.

Alternatively, if you really can’t bring yourself to watch a movie directed by McG and don’t mind hippies, watch Dazed and Confused for the original fashion

Last year we brought you the first edition of Carla’s Corner, an illustration series the lovely Carla Uriarte has made just for us. We’re stoked to…