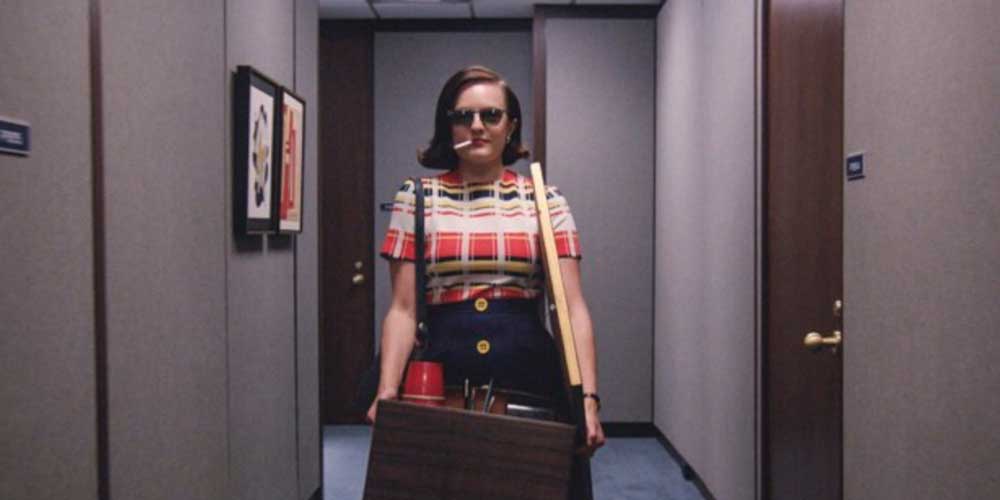 So Mad Men has wrapped, and it did a pretty tidy job of it. After 7 season’s Don was delivered in the only way he knew how—sapping other people’s pure intentions and selling them back to them. Joan finally realised she doesn’t need a man at work or at home. Pete…well Pete got rich and was always an asshole but Trudy looked cute at least. Roger found happiness and as much satisfaction as he could with an appropriate mate. And Peggy…oh, oh, Peggy.

There is no doubt Peggy is the hero of this series. She’s the one who will be entombed in the sacred halls of the feminist collective conscious with Liz Lemon, Leslie Knope, and Dana Scully. And by collective conscious, obviously I mean Tumblr. But what did you think of her big finale?

The cynic in me, that loves to shout, check your privilege! And, fuck the patriarchy! Was pretty bummed. Peggy has been everything I wanted in a TV lead. Fuck, she’s everything I want for myself. She is tough, smart, flawed, learns from her mistakes but not too fast, and really started nailing tricky matchy suits at the end there too. And when she and Joan looked like they were set to strike out on their own it seemed like a fitting end. Well obviously I wanted them to follow Joan’s suggestion to burn the place to the ground, but it’s Mad Men not Breaking Bad.

But she decided to pass on Joan’s offer in was a classing Matthew Weiner moment. He plays the delicate balance between reality and drama so well sometimes you surprise yourself by exclaiming, obviously! And I figured he has something else in store for Peggy.

So what did Peggy get? She got a happy ending—great. But she also got a love story. And I honestly don’t know how I feel about that.

Well that’s not true, I knew how I felt. I knew that I honestly love a well written I didn’t know I loved you until I started this sentence moment. And I like Stan, it’s undeniable they had chemistry. But come on, he is a bit of a burn out. She apologised for calling him out on it because she’s nice, not because she’s wrong. Also lets not gloss over the fact he very easily cheated on his very nice girlfriend who was a nurse for fuck-sake. Cheating is always bad. Cheating on a nurse is diabolical.

But whether she deserved a better dude is kind of beside the point, did she deserve a better ending?

Although my knee-jerk reaction is yes, I also found myself thinking about how obvious my reaction was.

We used to root for the girl to get the guy because that’s what we were taught they wanted above all. Then TV and movies started thinking before they spoke, and suddenly we began having (a few) heroines look past the broad shoulders to their own storyline beyond. But maybe we’re being too hard on Peggy? Maybe it’s too easy to assume that being successful means you’re automatically flicking cigarette ash on romance. And perhaps it’s short sighted to move too far the other way, and stamp our foot and say a perfect life doesn’t need a romantic storyline.

The whole series we wanted her to chew that show up and spit it out. And maybe that’s what she did. And after all, everyone knows Stan pretty much works for her. So she’s just another boss on Mad Men, making a move on an employee. Equality at last.

Bad Bit Choir have done the seemingly impossible by making being in a choir seem like the most fun possible. This group of baller girls spend…