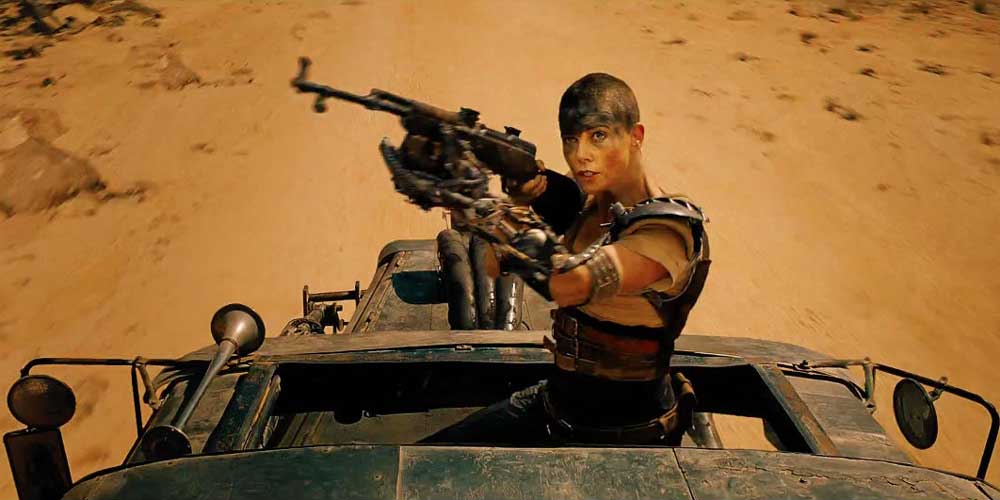 Tonight night saw the Melbourne premier of Mad Max: Fury Road, the forth instalment of the Australian series that people love to refer to as a seminal piece of American culture. For anyone not familiar with the films, they’re about pre-anti semite Mel Gibson tearing shit up in revenge for the death of his wife and child. As was largely hinted in the trailers, this modern reboot sees Max teamed up with a bunch of perfectly grime encrusted women, as they hurtle through the desert, blow things up, indulge Tom Hardy’s blood right to wear a face mask, and generally—well tear shit up.

At the time of writing this, the film has a 98 percent on Rotten Tomatoes, and most of the population is super stoked that after teasing us for decades, this movie not only exists, but is apparently dope. The key phrase there is most of the population. A small handful of men took issue with this film early on, asking why Max featured so lightly in the trailer, why Charlize Theron appeared to be the main character, and worse of all, why Max appeared to be taking orders from her at all?

Now, who knows why the Terminator or Alien series failed to draw these side glances, but whatever, sometimes being an idiot and being consistent is a big ask. If that wasn’t bad enough, the hater’s most ardent, breast-fed-till-ther-was-14 fears appeared to be confirmed when Rosie Huntington-Whiteley told Esquire that director George Miller asked Even Ensler —author of the Vagina Monologues— to visit the set for a week. Specifically she was there to work with some of the actresses who were portraying characters affected by rape and sexual abuse.

First up, let’s just pause for a second here to note that not only is one of the biggest blockbusters of the year taking the time to address violence against women—something constantly hinted at, but rarely seen in any major film—but they appear to be attempting to get it right. Ensler has previously worked with rape victims in the Congo, and apparently spent time with the cast to tell these women’s stories, and communicate to them the gravity and responsibility of taking on such a massive story lines.

But I digress. So first up, assholes on the internet weren’t happy about, oh you know, the responsible treatment of sexual assault. And it appears the final film confirmed all their fears when Theron was revealed to not only be the main character, but also take the lead in most of the fight scenes.

Cue the Reddit outrage of dudes saying they were tricked into seeing this film. As if watching something where a female is more than a body to fuck is the equivalent to being lured into a stranger’s van with candy. While the cause of RIP MAX has been taken up by sites like Return of the Kings (which I won’t honer with a hyper link), it’s really the comment sections and subreddits where the douche bags fly.

I really wondered whether or not to add any screenshots of the actual conversations, because I usually don’t want to reward trolls with any internet space. But hell, occasionally someone’s moronic views are just too lol to not SHFT+CTL+4. 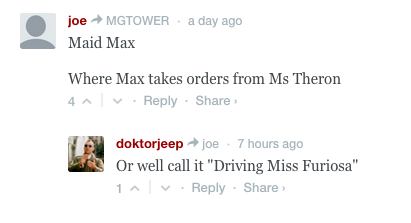 Usually in my articles I try conclude with something expressing my view, or what I hope can be reflected on going forward. But sometimes you write about something so dumb you honestly don’t need to attempt to summarise. So in closing the only thing I will say is—hey haters: Not all women use Maxi-pads.