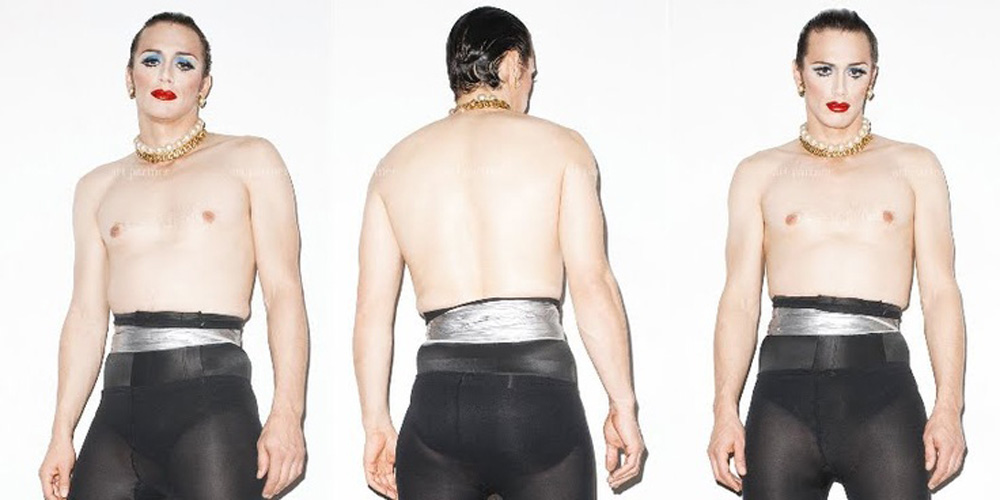 The public’s obsession with James Franco’s sexuality has always been a study in our own hang-ups. Since he emerged on the scene post Freaks and Geeks he’s been open about his personal take on gender and sex, and his exploration of both have been central in her work across platforms.

He’s played queer characters in several films including Milk, Howl, Wild Horses and the upcoming King Cobra. And last year he released the poetry book Gay James/Straight James, a project that began when he interviewed himself for FourTwoNine. It was in that article that he muttered the phrase that will no doubt punctuate every article written about him for the next few years: “I like to think that I’m gay in my art and straight in my life… Although, I’m also gay in my life up to the point of intercourse”.

In a couple of lines he introduced one of the most complex conversations about male sexuality ever dealt with in tabloid press. Suddenly gossip mags and click-bait sites were navigating perception of modern male sexuality. While female stars can reference fluidity in their relationships without raising an eyebrow, James’ flirtation with queer culture has seen his sexual preference become a public obsessions.

But while the mainstream press has only begun to unravel his non-traditional hetero persona, the art world has stumbled on a different set of issues.

First up, it’s not really anyone’s business where James Franco places himself on sexual spectrum. And there’s no denying that he’s played a valued role as an advocate for LGBT rights. But his continued presence in queer spaces has lead to some asking how much someone who isn’t strictly part of the queer community is allowed to feed from it?

After all the actor and artist clearly isn’t put off by the consistent dissection of his personal life, often using the rumors as fuel in his own work. In his Rolling Stone profile this year, journalist Jonah Weiner notes that for James “the line separating art from life can grow porous”, as anyone who follows him on Instagram would notice. A fan of self-consciously homoerotic selfies he calls his flirtation with gay imagery, “a way of finding out what boundaries are and pressing buttons.” Others argue it’s queerbaiting.

In 2014 Jerry Saltz called James’ restaging of  Cindy Sherman’s Untitled Film Stills a “silly self-obsessed demi-drag re-creations.” When the two got together recently for their much dissected New York Magazine interview they explored their critical disconnect and referenced the unease Franco stirs up in the art world.

Clearly not a huge fan of his fine art work, Jerry vocalised the resistance many feel to a “straight” man who feels so culturally connected to queer life. “I think you put yourself in a quadruple crosshairs,” he mused, “You’re a “celebrity.” You’re a man. You’re dealing with Cindy Sherman, of all people. And then you’re at the weirdest of all the mega-galleries.”

In her piece for Slutever last week writer and academic Kristen Cochrane wrestles with her own issues around someone from such an extreme point of privilege approaching and often speaking for another community. Calling it “queer tourism” she does note he’s hardly the first person to mine LGBT culture. After all, from t.A.T.u. to Katy Perry to every lesbian storyline on daytime TV female queerness has long been commodified. Again this fixation seems anchored in how unaccustomed we are to see a straight man attempt to press against the heterosexual boundaries.

Viewed from this perspective James Franco is doing a lot of good, venturing to shake loose the parameters of what’s expected of a “straight man” in 2016. But Kristen, like many of his critics, gets stuck on the question: “Is he profiting from his works economically or culturally?” Listen, if he was looking to get rich it probably wouldn’t be in queer independent cinema; but this association with this fringe art community has arguably lent him cultural cred in the arts and academic worlds that have been slow to embrace him.

This conversation doesn’t conclude with a right or wrong answer. It lives in a similar grey area of any examination of cultural appropriation: James Franco is free to express and explore his sexuality however he chooses, but does that freedom contract when he approaches another person’s cultural space? Just like how our obsession with him is an unlikely lesson in male sexuality, perhaps his obsession with queer communities is another lesson: that our most public discussions of fringe groups, are still spurred by straight men.

If you’re anything like us you have a giant soft spot for long read articles, you know the type: I was a transexual midwest…