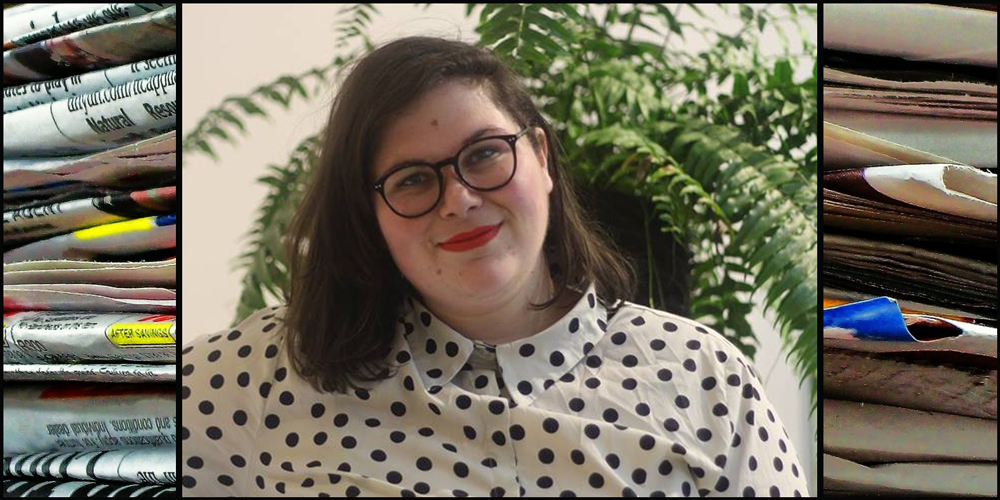 Brodie Lancaster is a terrifyingly talented writer and the editor of the best all ladies film zine going Filmme Fatales. When it comes to smart cool ladies on celluloid she’s an expert—not surprising seeing she’s a smart cool lady herself. Other than being a champion at recommending rainy day movies she’s a star contributor at Rookie and a member of the Good Copy family.

Through Filmme Fatales she’s become a clear young voice for independent publishing and an eloquent campaigner for the validity of print in 2014. If you have a dream project gathering dust in your top draw take a seat and prepare for some quality advice on getting motivated and forcing yourself to get it done.

GGG: Why start a zine as opposed to a blog or a Tumblr?
Brodie: Well I’d done all of those things before, when I started making Filmme Fatales I’d just left a job when I was editing a website for two and a half years. I kind of knew how to do that. Part of it was a challenge. I wasn’t consciously being like, “I’m going to make a magazine because print is not dead and I’m going to make a statement about it”. It was just kind of felt like something I could do in my own time that I wouldn’t need to update constantly like a website. I’d just done that for two and a half years and I was fucking exhausted. I like the timelessness of print as well.

Was it always going to be a film project?
Yes. For one I didn’t think there was something out there that talked about women in film specifically. I’ve since found some sites that do that kind of thing, but nothing in print that was really niche and focused on what I wanted to read about—which was women writing about women in cinema.

That’s one of the things that’s great about Filmme Fatales, it’s always so positive but never fawning.
I like being positive, but obviously think that there is a place for criticism. I’ve been reading the old issues again, getting them ready to go to reprint, and I’ve realised that since issue one, where there was a great critical piece on Friends With Kids, there hasn’t been a lot of criticism. That’s something I want to adjust. I don’t think feminism helps anybody when it’s just talking about how great some women are and ignoring the ones that are maybe doing shit that’s not so great.

What was the most surprising part of the process?
It’s always nice how people respond to it. I look back on some of the first emails I sent and I was like, “Umm, I’m kind of thinking about doing this thing and I don’t really know what it’s going to be but maybe you want to be involved?” People were really receptive so now I have a lot more confidence going out and pitching.

You’ve been smart with your use of Twitter to build a following, do you think Filmme Fatales would be what it is without it?
I don’t think so. In the beginning I just talked about it as much as possible. The first thing I did was buy the URL, I made a Facebook page and started inviting people and talking about it. That kind of held me accountable to it, and it also helped to develop that audience early on so I couldn’t bail out because I had people who were already following and invested in it. Just don’t keep it a secret.

Is that your key piece of advice for someone wanting to start something?
Yeah, also when you reach out to people you want them to see that people are invested and you’re not just creating something without knowing your audience. For me it was just a way of holding myself accountable because I have a habit of starting things and then not following through. Having people waiting for it was helpful.

Do you have plans to push Filmme Fatales beyond a zine?
I’m thinking about that. Issue five will be the first time someone else will work with me as a designer, and we’re talking about merch and that kind of thing because issue five is kind of a milestone—it’s two years since I started. I’m kind of at a stage now where I have to reassess how sustainable it is to do the amount of issues I’m doing myself.

Is the goal to do it full time?
I’m not sure, I’ve been thinking whether I should cut down to biannual, annual, or put it on hold while I do other stuff. There are other things that I want to be working on but I feel very loyal to Filmme Fatales. I’m kind of in a TBC state at the moment.

In a perfect world there would be piles of feminist publications, but as there aren’t, do you ever struggle with feeling competitive with other women working on similar projects?
Yeah, I’m a competitive person in all circumstances so it is pretty hard. But at the same time it’s great that especially locally, like what you’re doing and Ladies of Leisure, there’s so such high quality content. I don’t know many other film print magazines with a singular focus.

I don’t know what my answer is, I am a competitive person but since discovering feminism and making that a part of my identity I’ve kind of pushed that aside. Everyone is making great stuff and everyone is welcome. There are never too many women’s voices. But then I also feel territorial and think, this is my thing.

I’m the same with GGG. I love other people’s projects but it’s hard to not feel competitive. I tell myself: you can’t want social change and want to be the queen bee.
That’s a good line.

Yeah you can’t only care about something if you can be the boss. That’s a lesson I learned.
Oh my god that’s so right. When I started Filmme Fatales I’d just come back from New York, hated my job, hated my life, had no money, only a few friends, was not happy, and I came home and made a conscious decision to change that and make something for myself. I saw the photos from the launch party of the Rookie yearbook and thought: fuck I want to make something.

Do you think it’s changed how you work as an editor outside of Filmme Fatales?
Yeah for sure. Worked with Penny (at Good Copy) I’ve learnt how to be a proper editor. Before I was just kind of teaching myself. Filmme Fatales has been really good because even if the publication is someone else’s and I’m just working for the editor you have to know that the work that you’re doing is something you’re happy to put your name to. It’s about having that intuition and knowing exactly what your publication is and isn’t, that’s the editing lesson I’ve learnt along the way.

Do you think on a personal level it’s changed you?
I’m not sure, I mean it’s changed me in the sense that people now have this idea of me as knowing everything that’s going on in film when the act of making it means I haven’t watched a movie in two months.

The Return of the Cowboy Boot

A recent fashion article from the Chicago Tribune declared that cowboy boots are no longer reserved for those on the range. According to writer…