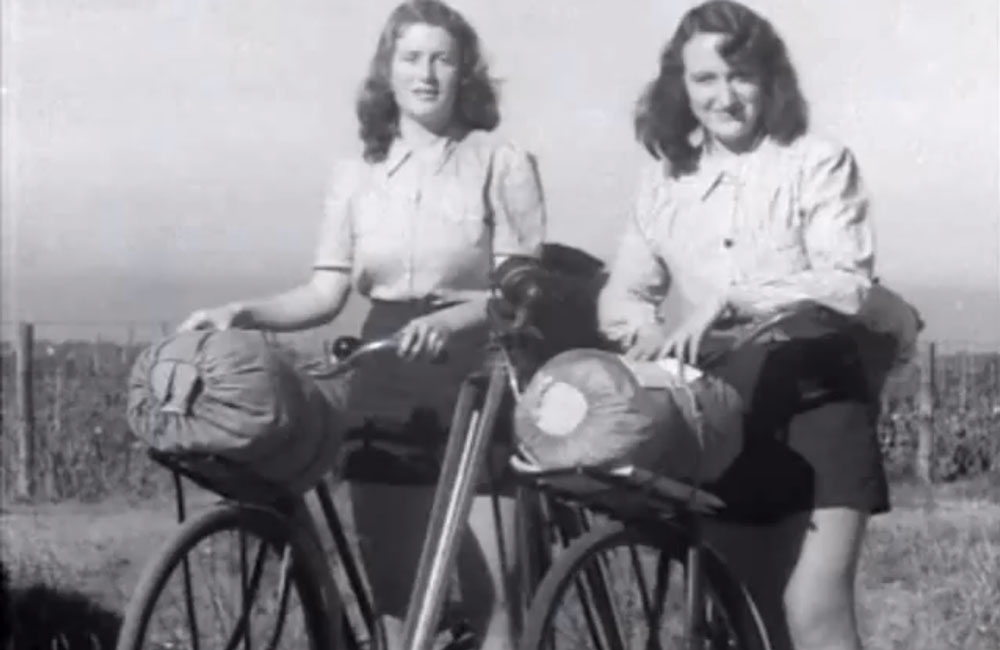 When I first learnt that two women aged 19 and 21 had cycled around the whole of mainland Australia my jaw dropped. How had I not heard of this? My amazement was only compounded by the fact they did it in the 1940s—on Malvern Stars. The combination of the decade and bike means the trip was completed with no gears and no breaks. My mind was officially blown.

Like many of us basking in our early adulthood, Wendy Law and Shirley Duncan were craving a bit of adventure, and they had Europe on their minds. In 1947 Europe was far from the backpacker saturated, tourist friendly place that Europe is today. World War II has just ended, and the continent was in a state of war-ravaged devastation. According to Shirley Europe was still all, “bombs and refugee rationing”. Tourist season wasn’t exactly open.

With post war Europe off the cards, the two decided on a very different, but equally extraordinary trip. Wendy and Shirley decided to cycle from Melbourne to Brisbane. What began as a simple holiday soon spiraled into a three-year journey traversing the entire coastline of Australia—including the ridiculously impressive feat of becoming the first people to cross the infamously hostile Nullarbor desert on bicycle.

Cute girls on bikes were attracting attention even in the 40s, and the two pioneers drew increasing media attention as their trip progressed. Original television footage demonstrates the girls achievement in possibly inventing the first mobile clothes line.

The girls were helped along the way with sponsor support; besides Malvern Star their financiers included Peters Ice-cream and the 40s favourite beef extract Bonox. The latter spawned a giggle-worthy 1947 advertorial in which Wendy is quoted by a newspaper as saying, “Bonox pours new strength into your bloodstream . . .makes you feel good too. Drink a cup of steaming hot Bonox every day.” Throw away those protein shakes ladies.

Aided perhaps by the Bonox in their bloodstream, the duo survived two separate attacks during the journey. They were unscathed following the first, but during the second a man grabbed Shirley by the throat as she slept in a Darwin church hall and threatened to kill her. Luckily their adopted Blue Heeler pup Peter sounded the alarm and the Vicar of the church was alerted and able to ward off the attacker.

The attacker was fined £10 for unlawful entry but only £5 for molesting Shirley. The incident led the women to take police advice and purchase a gun. The girls displayed a very modern attitude to gun control after practicing their shooting skills on gum trees; they decided they were more freaked out by the gun than any other potential dangers.

After three years on road, the two conquerors arrived home at Melbourne’s grand General Post Office to much fanfare. Every morning as I whiz past Melbourne’s GPO on my own bike (albeit a modern bike with both gears and brakes), I pay a little homage to the trailblazing women who forged their way around Australia on two wheels. Also a special mention, they did it in sandals.

Both women have published books about their experience. In 2008 Wendy released a book entitled With Bags and Swags: Around Australia in the Forties based on a diary she kept at the time; and Shirley released a book Two Wheels to Adventure – Through Australia by Bicycle.

Blog Of The Week: KENKŌ KITCHEN

May Kenko Kitchen  be the light at the end of the hangover tunnel. Food blogs go through trends just like anything else—possibly even more…