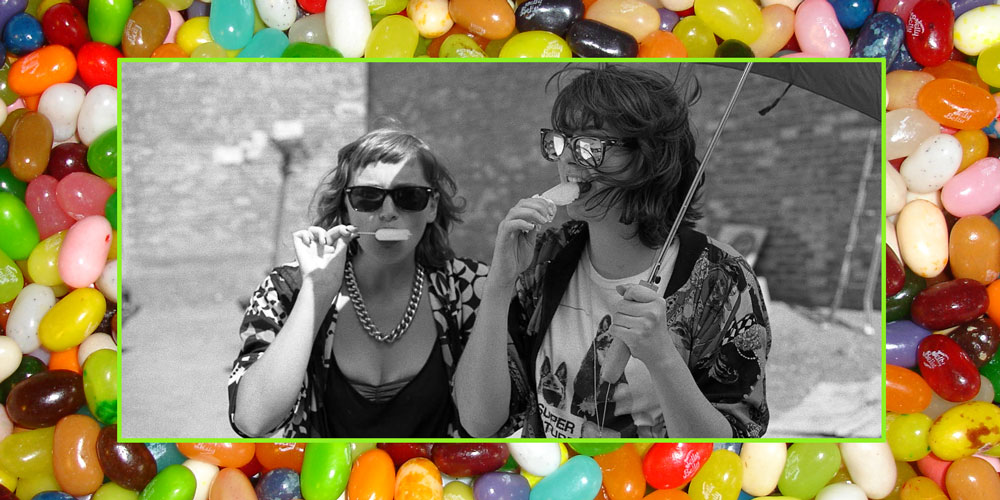 Katy Roberts and Jess Hopcraft are best pals, party professionals, musical madwomen, and members of the greatest band Melbourne ever produced. They’re also part of our upcoming Good Good Girl First Birthday Party lineup. We’re so stoked be have the girls playing for us we thought we’d formally introduce you all to them. If you aren’t lucky enough to have awkwardly danced to their tunes already, prepare to be amazed.

Our names are…Katy and Jess.

If we chose them they would be…JJ and Abrams.

We are…best pals who like to take up a lot of space on the dance floor.

We aren’t…exactly sure how to answer this one.

If we could be housemates with anyone it would be…each other. Then Katy would want David Lynch and Jess would want Keanu Reeves.

If we could be best pals but not share a kitchen with anyone it would be…any and all corn chip haters.

When we’re not making music we…both work in production cos we’re suckas.

If we had super powers they would be the ability to be two places at once and we would be at work but also watching TV and drinking tea in bed. Would be cool to be able to high-five yourself too.

If we could go back in time to any place it would be to our second apartment in Berlin  2010 and we would relive it all over again.

The most embarrassing thing that ever happened to us was…something that will go with us to our graves.

Cats or dogs? CATS, and definitely not the dog we lived with at the aforementioned apartment.

What do you like best about each other? Katy is secretly super tough and I know she always has my back. Hence, my plan for the apocalypse is to ride her coattails until I get impaled or lose a limb and become a dead weight. She has watched enough survivor to become the leader of the new world post apocalypse. She’s also a really great dancer.

Jess is one of those rare people that is afflicted with being genuinely, incomprehensibly kind. Sometimes I think this sucks for her, but if you’re lucky enough to be a friend of hers—this is awesome! I once irrationally threw a glass of wine on someone for nowhere near a good reason, and she still had my back. I.e. in the face of total idiocy, Jess will still be your friend!

This is also why she is integral to my new world apocalypse team. She’s also the funniest person I know, and always has the best comebacks. She once told a guy he had a linguini dick.

Check out the ladies in the flesh Thursday 13 November at our party!

My Irritant, My Idol