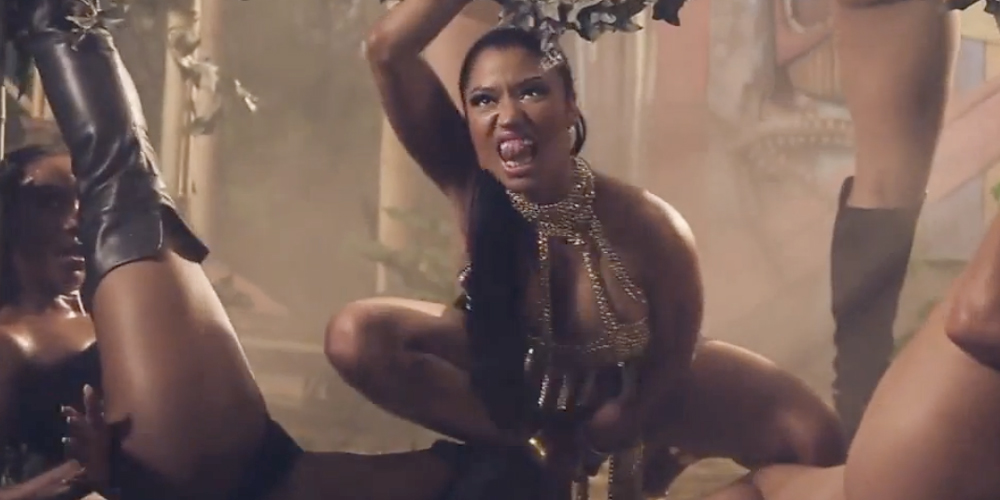 When talking about women in music who are kicking goals for feminism Nicki Minaj isn’t usually considered in the same breath as the likes of Beyonce or Taylor Swift. While it feels like the later’s every move and lyric are placed in the Museum of Great Moments in Feminist History, Minaj is often overlooked as a somewhat cartoonish representation of what it means to be a woman in music today. Despite her intimidating skill Minaj is so often painted as the poster girl for all the artificial colours and flavours that make up pop.

In reality, Minaj’s background has been an incredible picture of a woman succeeding in a male business (hip hop) since before most people had any idea who she was. Coming up through the highly masculine hip hop world she had a solid reputation as a rapper and freestyler before her candy coloured transformation. YouTube is a treasure trove of an early, sometimes unrecognisable, Minaj cutting down everything in site with her unmistakable talent and intelligence.

The fate of not being taken seriously because you wear a lot of makeup or can laugh at yourself isn’t one that she bares alone, it’s all too familiar for many women in all industries, but it does often feel like she is disproportionately defined by her appearance. Maybe her style is the most surreal, but so is her talent.

Personally I’ve liked and respected her since the immediately iconic Pink Friday, but her raw power really hit me when I saw her burning a hole Kanye West’s special guest heavy track “Monster”. Placed against the biggest names not only in hip hop but music she is arguably the best moment on that whole album. But even before I fully realised how talented she was I appreciated her positive approach to her own body and personal image, interpreting both as a clever inversion of the pop star paradigm. Although the joke was clearly often being missed, and for a while it seemed like she had been resigned to being seen as a bit of an oddity and it was a bummer that her keen sense of irony wasn’t being fully appreciated.

When the video for “Anaconda” was released last month I was excited to see her power and importance on such full display that it would be impossible to ignore. If you’re one of the few who have escaped it, it contains a sample from Sir Mixalot’s 1992 track “Baby Got Back”—a song that’s focus on women is so insane it goes completely full circle to the point 12-year-old girls dance to it at birthday parties.

When that song was released, by a man, no one took it seriously. And in the two decades since it stands up as an inoffensive novelty song. In those 22-years since its release I really doubt anyone listened to it and took it seriously or attempted to see it as a statement on anything other than a dudes love of butts.

But when Minaj got her hands on that sample and wrote her own celebration of butts, specifically her own, suddenly the song was reborn as a hyper-sexualised anthem of body acceptance and female power. The constructiveness of the sexual nature of the song is debatable sure, but at least it isn’t passive. In the track she’s active in the reaction her body causes and at times fantastically terrifying.

What you think of the song itself is obviously personal, but the external reaction to it is what I find the most telling. Sampled and sung by a woman a song that previously existed as a joke on party mixes becomes a controversial statement. It’s perhaps one of the most cut and paste examples of a double standard we’ve had this year. When a man sings about (other people’s) butts it’s funny. When a woman sings about her own butt it’s water cooler talk.

Much has been made about the clip, but other than point out it’s no worse than any of the classic Chingy or Nelly you probably listened to in high school, it also needs credit for it’s tongue in cheek take of the “sexy music video”. Like so much of what she does Minaj takes the whole thing to such an extreme she forces you to have an opinion on women in music. Whether you think it rules or is in poor taste she makes sure no one is passive in the discussion of bodies on TV.

In “Anaconda” men are represented by a totally paralysed Drake—a current giant in the music industry rendered useless in the face of this powerful woman taking charge. It’s an image of Minaj in the industry in general—enjoy and appreciate her or be left traumatised.

But finally the track is the year’s—possibly the decade’s— greatest love song from a woman to her own body. She’s saying, I get that you’re obsessed with my body, you should be it’s amazing. And guess what so am I.

Can’t We Wear Hats and Get Drunk Without Killing Horses