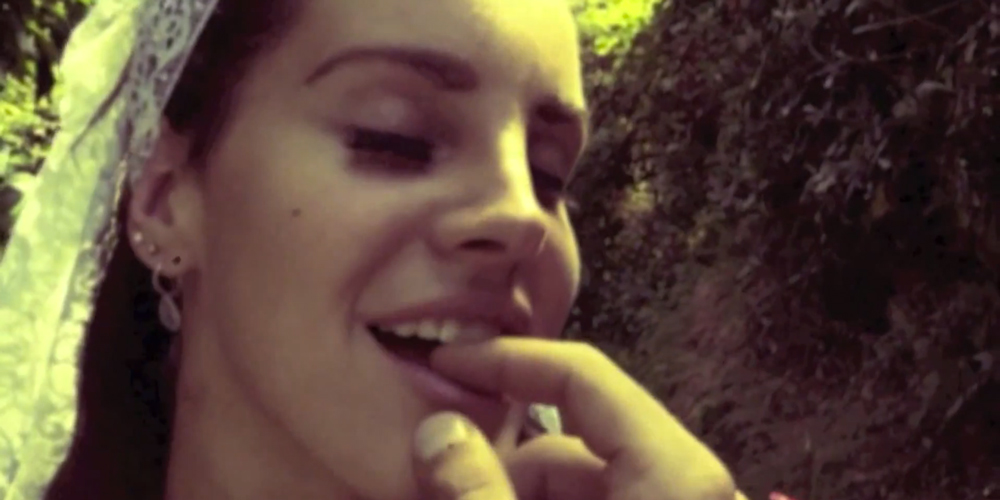 Lana Del Rey is seen in her recent video for the title track of Ultraviolence as an 8mm glowing bride, dolefully walking to the church. The filter is indicative of Lana’s commonly played characters, though the lyrics (referencing The Crystals “He Hit Me”) are a foreboding indication that the smiling bride we see is in fact on her way to a doomed marriage, trapped in the sanctity of the altar in which we leave her. Women just like Lana’s bride can be found in shoeboxes across western civilization. You open them up to find pictures of grandmothers unknown, except for stories of adultery and divorce. The forced happiness of the big day finally starting to fade from the sepia tones.

By now everyone’s aware of Lana’s dismissal of feminism as boring. Some have tut-tutted themselves into gleeful smugdom that yet another female has abandoned the cause because of their dedication to the dreaded cock (something only unenlightened women do). As though every woman gets to make the decision between feminism and a stripper pole in her. If Lana depicts females that aren’t the empowered ideal, it is only because any series of events deny women that tag everyday.

I think Lana does a real service to women by admitting that it is easy to fall in love and easier to justify it. No woman gets hit and likes it; it’s not glorifying to love a bad guy. I can’t understand why that is how some are choosing to take Ultraviolence, but I’m not surprised. Dismissing what doesn’t comfort you is such a basic bullying tactic it is barely disguised by the sarcasm that vocalizes it. At the end of the day for women, there usually comes the need to sacrifice some part of you to just exist in what is a very unsatisfying existence. Lyrics such as “He hit me but it felt like true love” should be admitted and interpreted more amongst females. Only because getting to the bottom of why we need true love could lead to the self-assurance one uses to evade violent relationships.

No one chooses to be with a violent person. But it happens, a lot. Feminism, like any ideology, looks so good on paper that it’s crazy to think that some women choose otherwise, but you’d be surprised. I’m not with anyone that hurts me when I “talk to loud” anymore, but there was a time when I didn’t know any better. It’s a big world with lots of neon lights, more so than female comrades with shoulders to lean on.

It’s not to say that I don’t agree with a lot of the main points of feminism, but hell, I don’t go to church every week either. My trouble with feminist ideology is like any other guideline I have had to follow, I’ll fuck it up most likely. Maybe when I die I’ll put some Bikini Kill lyrics on my gravestone for the entire world to see my commitment to the cause, but for the moment that’s not as important to me as articulating the heartbreak that is more common between females. The world that exists between men and women is so painful at times that it has to be retold in a romantic way, with sentimental lyrics and edited dialogue. It’s something reference when we need comfort from the practical joke that is the modern dating scene and the “losing game” that women like Amy Winehouse played. What I like about Lana, is that she is being honest. Relating to her music in the weakest sense, you’re remembering a fling or all the awkward and kinda-sorta relationships in your teens. At the other end, it’s addressing the ultraviolent feeling that some sleazy drunk is going to put his hand on your thigh instead of the guy you like. No matter how pretty you are.

The poor pretty girl has been a long idealised stereotype. Though Lana is so much more accurate about the isolation that comes with being what society deems attractive than that other poor pretty girl Britney Spears who sang about being “Lucky” back when I was 13.

Both Britney and Lana get it, being sad can be a default state for some girls. What Lana understands though is that it’s all a bit of a joke. Britney was sad because everyone thought she must have it all and she was lonely. Lana not only knows she doesn’t have anything; she is voicing that struggle between wanting love and adventure or her own wellbeing. It’s probably one of the most common female experiences, arguably more so than growing and being nurtured through feminism. Lana isn’t promoting submissiveness as much as she is over-dramatisng the female tropes to highlight the banality. The sad bride, the party girl with the older drug dealer boyfriend, the indie girl who isn’t in a band, but her boyfriend is.

The monotonous hum of collecting interests and experiences that a lot of western culture subscribes to isn’t a positive environment for anyone, including females. The reality of teen pregnancy and domestic violence could never fit the template of an ideology. There will always be women out there who don’t read much, who believe violent men love them, and use tears as their (only) weapon. It would be nice to sit down for a diplomatic conversation about such women’s options, but I think the painful truth of that possibility is hidden somewhere in one of Lana’s songs.

What I relate to most in Ultraviolence is the common mood that given the circumstances, sometimes you’ll mistake true love for anything you need it to be. Maybe it’s still just as hard to be taken seriously because you’re female as it has always been and the circumstances are somewhat invisible and hard to articulate in that very feminine way that gets internalized. So if you are using feminist theory to pull a female down a peg, you’re not empowered—you’re just privileged. It’s no different to dismissing someone as uncool.

It’s very hard for women to talk about the mistakes they’ve made with men, a lot of them had no options. Feminism, for me, was the arrow to a doorway away from male chauvinism. So I hate to look back and see everyone too timid to admit they like Lana Del Rey. It’s music, let’s not leave each other at the altar over it.

A girl walks down the street, scratches her head and thinks about how mouth-wateringly hungry she is. Upon turning the corner, a McDonalds appears…