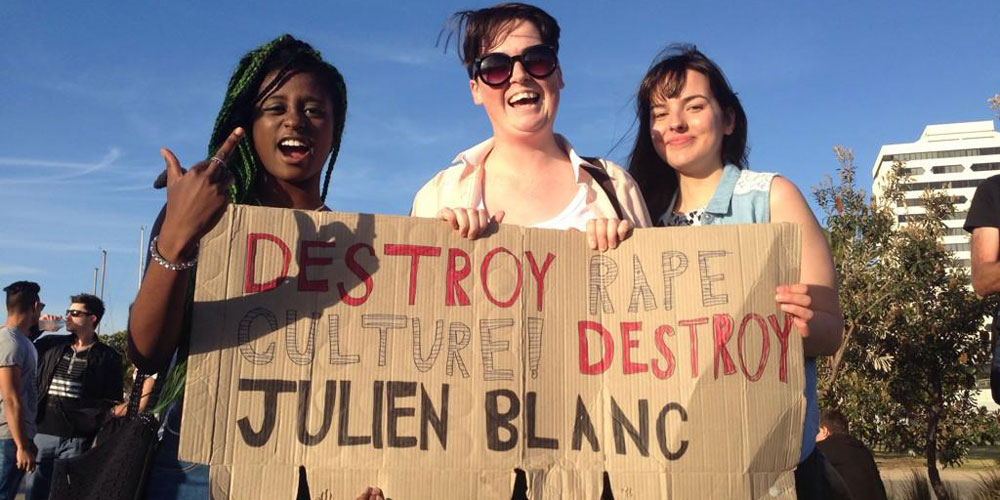 Like most women around the country last week, we cheered when we saw the group of women call ultimate bullshit on Julien Blanc’s attempt to hold his creepy pick up seminar on a Yarra River cruise boat. After not getting the point when his hotel based talks were cancelled, a bunch of honorary Good Good Girls drove it home by intersecting his last ditch attempt to spread his dangerous hate speak. Our pal Elly Scrine was one of the insanely cool girls who took a stand and shut that shit down. She told up how it happened.I happened to hear of “Real Social Dynamics” representative Julien Blanc early last week, only a matter of days before he was set to hold one of his “pick up artistry” seminars in Melbourne. A quick internet search led me to the most widely publicised video—Blanc’s seminar on how to pick up women in Tokyo. The disturbing content of the video demonstrated an entire spectrum of racist, misogynistic, manipulative and assaultive behaviours. The overall flavour? Encouragement for the abuse of white male privilege. Not only does Blanc create a space to legitimise and support rape culture, he makes a profit by advocating and instructing it. I decided immediately to attend the event I had seen on Facebook, to converge and protest at the spot the seminar attendees were rumoured to be. On Thursday evening at 6:30pm, a couple of hundred protestors congregated at the St Kilda Pier, alongside 20-30 young men clearly there for the seminar. Not long after that, the group of men suddenly started to disperse to their secret seminar location. My friends and I enthusiastically set off on our #TakeDownJulienBlanc quest, quietly tailing a group of them on a tram into the city. It all felt excitingly clandestine as we attempted to detect where exactly they were heading and if Blanc himself was there. To skip further ahead, Blanc had his assistant, “Max” attempt to run the seminar. On the walkways of Southbank, he begun speaking to the growing group of attendees, as a group of about eight of us surrounded him. We protested in earnest, chanting “sexual assault is not ok” over and over, surrounding the group and drowning this “Max” character’s voice out. Eventually, two of us managed to get inside the group, where I stood in front of Max and blocked his view of the seminar attendees. At this point he called his two personal security guards and I heard him hiss, “Do your fucking jobs man, what are we paying you for? Get this bitch out of my face”. The seminar then moved down to a cruise boat moored on the water, which around 50 young men boarded quickly. We surrounded the boat, and there were about 30 of us (protestors) by the stage. The boat’s crew were utterly bewildered, initially threatening to call the police on us as we chanted loudly (but made absolutely no threats of violence). We told them why we were there, and two of the most experienced activists in the group locked onto the boat as it attempted to take off, at which point the crew relinquished all efforts to support the cruise. Police began to show up, and we stood far back from the windows of the boat in order to demonstrate to them that we were undoubtedly there for non-violent protest. A highlight included Max popping up from a window to film us, at which point I questioned him directly, asking how he slept at night knowing he was glorifying sexual assault. He gave me the finger and yelled back, “I’ll see you in hell, feminist bitch”.Eventually, more and more police showed up and the calmer representatives of the protest negotiated with them until they committed to getting the seminar attendees off the boat. The entire group of us protestors moved up onto the walkway above the river dock, to make evident to the police that our objective was simply for the seminar to stop peacefully. While we were noisy and passionate, there were absolutely no threats of violence, physical or otherwise. Published reports all over the news quote Max as fearing for his safety, labeling our protest as “violent” and “sad”. I found this to be an ironic notion, considering our aim was to put an end to a seminar that incites assault in such forms as placing women in “choke-holds” around their throat.Footage from the night showed the final throws of the protest, as the men finally disembarked the boat, around 1.5 hours after their seminar began. They were guided by around 30 police, and chants of “shame” from protestors. Many of the young men were laughing, waving and jeering at us as they left—this frustrated and saddened me. I reconciled this as the only kind of response we can expect from the type of men attending an event that coaches how to manipulate, subdue and control women in order to satisfy male sexual desire.While the culture that Blanc, Max, and these seminars represent will continue to disturb and incense me, I celebrate our efforts on Thursday night. Our actions were publicised broadly, internationally, and were the catalyst for the cancellation of Blanc’s Australian visa on Friday. Whether or not Blanc’s videos were taken out of context, his message does not exist within a vacuum. It is a small part of a systemic problem that exists globally. The misunderstood concept of consent creates interpersonal violence against women in many forms. Blanc sustains a profitable business out of instructing the abolition of consent with total impunity. I rejoice in the fact that Australians took an active stance against Blanc, and will use it as a personal symbol for the feats we as conscious human beings are capable of.

Any readers experiencing abuse shouldn’t hesitate to reach out for support.

The Fappening: Why Do Only Some Women Deserve Our Sympathy?

It’s been two weeks since “the Fappening” and in that time the debate around our attitude towards everything from privacy, to celebrity, to women’s…