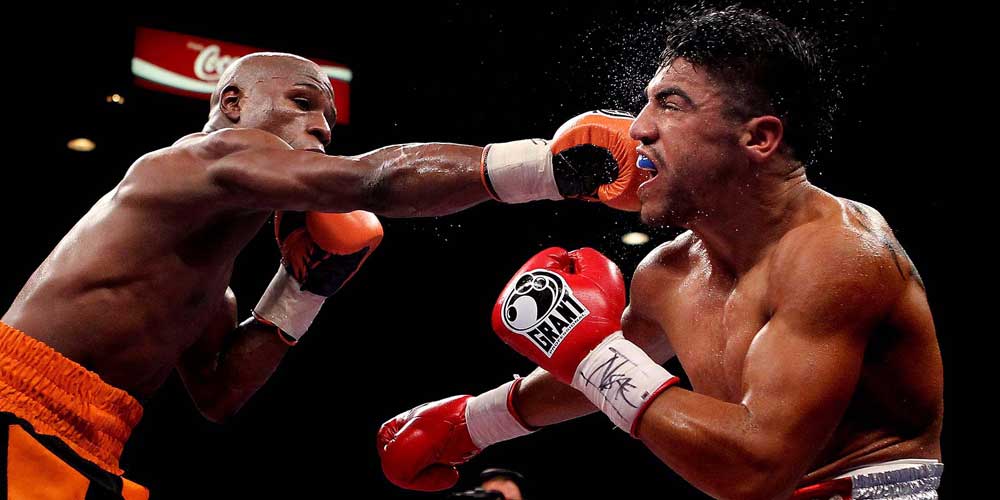 There has been a lot of discussion around domestic violence in the media this year. Sure, it’s not enough, and the statistics still reflect a broken culture of abuse, silence, and oppression, but we can take some comfort in the knowledge that attitudes are shifting—right?

Any comfort you might have taken in our community’s growing awareness of the plague of assault should be shredded today as the world froths at the mouth to celebrate not only professional boxing, but the monsters it makes rich.

Today, Saturday night US time, Floyd Mayweather Jr. and Manny Pacquiao go up against each other in Las Vegas. It has been called one of the most anticipated fights in boxing history. But it’s not just anticipated, it’s expensive. The two men will make $300 million between them. The Mirror reported that “Assuming the fight lasts the full 12 rounds, Mayweather will be earning $4,994,681 per minute of action”. The numbers are staggering, but the people who will tune in hardly blink at the amount, this is just the kind of money men like this make. It’s the price they’re paid to provide violence and entertainment for an audience, they’re fulfilling a role that has existed since ancient times. Humans love watching people be brutalised.

The whole culture feeds back to a sick irony. We love seeing people be hurt for our amusement, but we can barely bring ourselves to speak about violence outside of the spotlight, behind closed doors, where the participants aren’t willing, and certainly aren’t paid.

So many parts of these men’s lives and pasts have been analysed and discussed, but one of the most telling and important features has been pointedly ignored. Mayweather has a documented and undeniable history of domestic violence. He currently has been arrested, or received citations for at least seven assaults against five women. These are among several other altercations where the police were called but no charges made. A known and open misogynist, it’s not a jump to assume there are other assaults we don’t know about, and will probably never know about, because our cultification of men like this insulate them against consequences. And in doing this we normalise their behaviour, and send a message to the men who worship them that their own actions are acceptable. But more sadly, we remind the women who these men hurt that their lives don’t matter. That only money, fame, and bloody entertainment carry any real currency.

There is no reasoning that doesn’t conclude Floyd Mayweather should be in jail. He’s not. He’s the highest paid athlete in the world right now. How the fuck do you expect a woman to go to the police, to speak out, make her most private life public, and demand help and justice when every interaction she’ll have with the media today will be celebrating this man.

Men who raise their hands to women are equally at fault, there isn’t a scale to their bad deeds. Money and fame aside, they’re all guilty. But it should be noted that this is a man who makes his living with his fists. He not only knows how to hurt someone, but how good he is at it. That knowledge has never created a moment to pause or contemplate any responsibility he may have. No one seems to care though.

Mayweather is a monster, but he’s not a singularity. Professional sport is plagued by these men, who could be used to make an example and set a precedent, but rather slither out of trouble on their bellies. His opponent Manny Pacquiao has been repeatedly painted as the “good” one in this match up. But in boxing, being the nice guy involves a past of openly fighting against same-sex marriage and cheating on his wife.

These men are two slices of a very broken industry, that not only protects men like this, but creates them. You raise men from children to inflict pain on other living creatures. You egg them on, celebrate them as gods with broken teeth, reward them with cash and moral and legal immunity. Then you tell the whole world to watch their fights and forgive their sins. Although Mayweather is a monster, he’s also a product, moulded from a broken system we created ourselves with our own money. By turning on your TV, placing your bets, and participating in the hype you’re fuelling a cycle that will keep producing Floyd Mayweathers.

As a society, we like to think we’re better than we are. Our middle class virtues protect us from our own roles and responsibilities. We read that in Australia alone, two women die a week due to domestic violence, a figure that is increasing, and feel sad. But then think little of a man like this making $180 million dollars in a night.

When you look at his pictures in the paper, don’t see him. Don’t see his shit-eating grin or his sickening cockiness. Look past it, see the women he has hurt who shiver whenever his name is mentioned. Think of the women he will hurt because he’s so clearly unstoppable. Think of the men who look up to him, who celebrate him, who see themselves in him and will also act in abhorrent ways. And think of the women in those men’s lives, who daily pay the price for our two-faced attitudes about violence against women. Who we let down when we take part in this medieval display.

For some parts of Australia it’s a long weekend, so it’s the perfect time to curl up, settle down and pump your brain full…