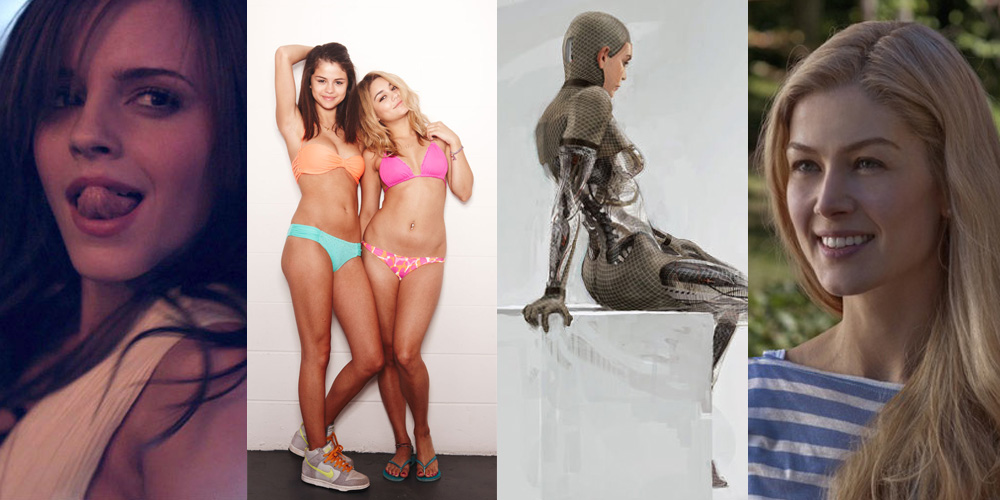 This article was by Good Good Girl contributor Jonno Revanche. Jonno is the editor of Vaein Zine, a publication by and for LGBTIQ young people.

“Isn’t it time to acknowledge the ugly side? I’ve grown quite weary of the spunky heroines, brave rape victims, soul-searching fashionistas that stock so many books. I particularly mourn the lack of female villains — good, potent female villains. Not ill-tempered women who scheme about landing good men and better shoes (as if we had nothing more interesting to war over), not chilly WASP mothers (emotionally distant isn’t necessarily evil), not soapy vixens (merely bitchy doesn’t qualify either). I’m talking violent, wicked women. Scary women. Don’t tell me you don’t know some. The point is, women have spent so many years girl-powering ourselves — to the point of almost parodic encouragement — we’ve left no room to acknowledge our dark side. Dark sides are important. They should be nurtured like nasty black orchids.”  - Gillian Flynn

Today it feels like there are three subsequent incarnations of filmic women, appearing in different forms, making their mark on viewers. One is shy and curious and quirky (don’t make us say Manic Pixie for the billionth time online). She exists, seemingly, for the gaze of the male. She is the archetype that was knowingly explored in 500 Days of Summer and works her magic to give him importance. She is small and ready to appear in any indie rock movie of choice. She appeared in Garden State and Elizabethtown and was almost forcibly “quirky”, had a unique outlook on life, and was startlingly two dimensional from a writing standpoint—although the talented actresses who played these characters shouldn’t be blamed. She usually served to become a plot device in the narrative of a male protagonist.

Then there is second incarnation. She also exists as a plot device to prove male expectation and panders to the male fantasy. Gillian Flynn expertly explored her in Gone Girl: She attends wicked wing eating challenges but fits into Victoria’s Secret lingerie as if she was built for it. She is the Cool Girl. She’s the girl women are “supposed” to be—the good girlfriend, the girl who will do everything at once and never complain. The “Cool Girl” is an aspect of mainstream film more than anything else, she’s the typical girlfriend. There are too many examples to list.

Then finally, leading on from the CG with the help of Glynn, there is the Gone Girl. Explored in the aforementioned movie and book, she’s the psycho evil, futuristic femme fatale, succubus girl—the PSBG, to make things clearer.

These movie tropes are more than character short cuts; they’re a mirror to how women are viewed in larger society in that moment. The “femme fatale” of the 30s and 40s was a way to warn the public about the “new woman”, who had found financial and social independence outside of patriarchal hegemony and marriage. The femme fatale was uncontrollable and used her sexual power ruthlessly to get what she wanted. Handled well she was a symbol of liberation. But she was just as easily a warning sign to the dangers of female sexuality.

The psychotic succubus girl is arguably another plot device. If we’re talking about her as the one character, then she is shrewd, fun-loving, sexy, and flawless. In addition, she is entirely self-invested. She exists within capitalism and is using what she is given to rise to the top, teeth bared, and bare chested. A female fantasy dressed in sheep’s clothing—and in the end, she always gets her way, and is often dismissed of her crimes. In Ex Machina, a female robot uses her wit and power to seduce a man and escape to freedom. The conclusion of the film demonstrates this quite clearly: she is seen climbing into a helicopter and escaping her prison to live her life out as a regular girl, completely guiltless of the murder she has committed and the men she has manipulated in order to get there. It feels like some kind of warning.

Not only does the psycho succubus girl have full control over her intelligent and planning methods, she is also explicitly sexual. She is aware of her sexuality – and she is proud of it. She is not new to using that sexuality to proudly and flawlessly gain control over men. In Spring Breakers, James Franco’s character and all of his weapons and contacts are laid out for the girls to use at their disposal. Then the girls turn on him, and in a stunning and unsettling piece of 2013 cinema, put the guns in his mouth, imitating fellatio. This is the ultimate “turning the tables”, a way to demonstrate how women can turn sexual power into something more ruthless. From then on in the film it is no longer James Franco’s character, Alien, calling the shots. He essentially becomes a puppet in their plans to get money, cause havoc, and have the most amazing “Spring Break” ever.

Similar scenes can be found in Ex Machina, and The Bling Ring. This is the power of the succubus in action. The transformation from Disney star (Vanessa Hudgens in High School Musical and Selena Gomez in Wizards of Waverly Place) to murderous yet fun-loving psycho girl is an apt reminder of how these fictional characters change from sweet to cunning at the drop of a hat.

The psycho evil is often situated as the White, cis women too—she could be an unintentional commentary on singular focused white liberation. The cost of female power comes with the exploitation and appropriation of the more grounded, non-white women. Think of Amy’s careless consultation with her Latina neighbor in Gone Girl, the massacre at the apex of Spring Breakers, or Ex Machina’s guiltless stripping away of the Asian robot girl. (In earlier scenes, the Japanese robot Kimoko is lacking in agency, cannot speak English and serves to sexually pleasure her master only.)

In a way, these moves are terrifying – but only because they represent the common binaries of real life, the tough questions, and our hierarchal patterns of gender and race.

The PSBG does not understand how to not be remarkable on her own terms. Emma Watson’s character in The Bling Ring is beautiful and a budding entrepreneur, casting aside her best friends in the search for redemption and celebrity. She uses her testimony in court to create a new name for herself, just like Amy does in the police station at the end of Gone Girl. She’s crafty and knows herself inside out, using her femininity to play roles, to mess with her audiences, to weave in and out of situations.

In comparison to a more dated construction of the “femme fatale”, the tone and framing of the PSBG is left more ambiguous, leading us to question the society that makes these people as opposed to centering the blame entirely on the individual. In this way, the PSBG reveals a sly critique of capitalism by handing the power temporarily to the woman: a girl making it to the top of the ladder isn’t equality, really, it’s just another form of violence that exploits another. A female CEO, for example, does not symbolise true female liberation. It only ushers in the inclusion of women into a structure and society that exploits thousands of less privileged people.

Realising this set of values critiques white feminism by presenting exaggerated examples of the “successful” participant. When we look into the psyches of these characters, we are in fact looking into a mirror, or perhaps a crystal ball. We are seeing ourselves for the first time, well and truly, and that is why these movies are so shocking.

I should say—that is why these movies are so shocking to men.

The PSBG is not just a one trick pony. Most noteably, it feels like it comes from a deep fear of women, and women’s sexuality if it’s given full reign. It’s as much a commentary on male sexual power and violence, too—how does this look if it comes in the package of a former Disney star, in a neon bikini? She is scary, but also strangely seductive. We want to see what will happen if the tables are turned. We want a breath of fresh air, some kind of revenge. As viewers, we pay for this, we get excited by this, we give it rave reviews.

The PSBG is not about women. It’s a critique of the things we fear about women, the things society has held from them, and what we think will happen if power is equalised.

We always knew our Canadian pal Alisha Davidson made zines, comics,  awesome illustrations (the dogs are our favourites), and generally cool quips about daily life. But…