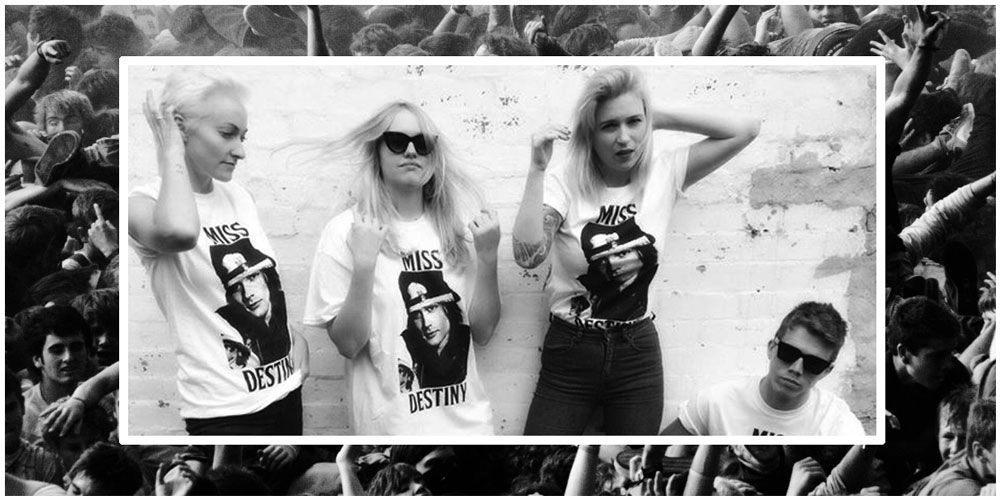 Miss Destiny are exactly what you want in girl band*: tough, cool, and talented as all hell. Too often women in music are put in boxes or on pedestals, but these ladies make blistering songs that are so good you don’t have time to over think it. Imagine if Debbie Harry had joined New York Dolls rather than Blondie—a total dream with zero fucks given. We spoke to guitarist Harriet Stewart about being in the coolest band out.

*okay they’re a mostly girl band, but we’ll let them keep the title

GGG: How did Miss Destiny initially get together?
Harriet Stewart: Harriet Hudson was with Brett and they sent me a text saying ‘oi do u want to start a rock band called Miss Destiny’ and I was like, ‘God yes’. Then they started coming over to my place heaps and we got pissed and wrote jams over the summer.

When did you start learning to play guitar?
I had always wanted to play bass like Nikki Sixx from Motley Crue and after me harpin’ about it my older boyf bought me a bass for my 16th birthday. The angel got me a stand for it and everything. I learnt “Twist of Cain” by Danzig and then gave up. I started playing guitar in my early twenties when I was living in London. I was dirt poor and massively depressed and stuck in miserable old London with no cashola to get home.  I would write these gruesome songs in my room all night, it must of been excruciating for my housemates to have to deal with.

What have been some of the hardest parts of being in a band?
We are pretty privileged in Melbourne that there are tons of music venues and bands and everyone in the scene all knows each other and helps each other out with gear and booking gigs and promotion etc. Negotiating and chasing up payments for shows is a drag I guess.

What are some highlights then?
Being in Miss Destiny is so fun as hell. We love writing songs, having lolz, hanging out and also playing gigs and getting drunk and starting trouble.

What does the future hold for Miss Destiny?
We have a 7″ record coming out this month on USA label Hozac Records and an Australian tour in Sept/October. We are also getting in the studio in September to record our first full length LP and are planning an American tour for 2015.

Tell me about your female musical influences or role models?
Courtney Love is a major one for Miss Destiny. She’s the most unapologetic punk in the game and a great, real as hell songwriter. Joan Jett is another dead set legend. Great jackets, great hair, great guitar playing. Madonna because she’s the rebel of pop and a camp trouble maker just like us.

Rock n Roll has typically perpetuated gender stereotypes with women traditionally being the passionate fan or bystander girlfriend. Do you think rock music these days is neutral towards gender?
I think the fact that you are asking the question shows that the rock music scene is not gender neutral.  Even in our own turf of Melbourne’s inner north we find ourselves playing gigs where we feel belittled by sound engineers or cop sexual harassment and intimidation from the crowd for just stepping on the stage. I was backstage at a gig once hanging out with Beaches (who are an all girl band) and a bouncer came in and announced no girlfriends were allowed backstage and tried to kick us out and Beaches were the headlining effing act that night! I cut so sick at him.

How would you explain the imbalance between the number of female musicians and male musicians?
There is an underlying message that is pushed on women through media and advertising that they are expected to be cute lil girls, maternal care takers or sexy vixens in order to hold any value to men or society. Getting onstage and shredding or banging some drums or yelling your head off doesn’t fit in to heteronormative gender expectations so it’s no wonder women aren’t drawn to it when they will consciously or unconsciously know they will be making a choice to not fit it and will consequently be punished by society for it.

Have you encountered any gender preferential treatment?
I know we are very conscious of making sure our shows are inclusive of girls and gays and we don’t like to play with jock bands but I would be surprised if I was to find out we had been put on a bill or played on the radio because we are majority women. I hope any preferential treatment is for us being heaps sick.

Is there anything you would like to see changed in the music industry?
It would be wicked if there was more girls and gays in the scene so it got more fun and more inclusive.

Do you have any advice for aspiring female musicians or women who are interested in making music?
It’s better to be cool than to be hot.