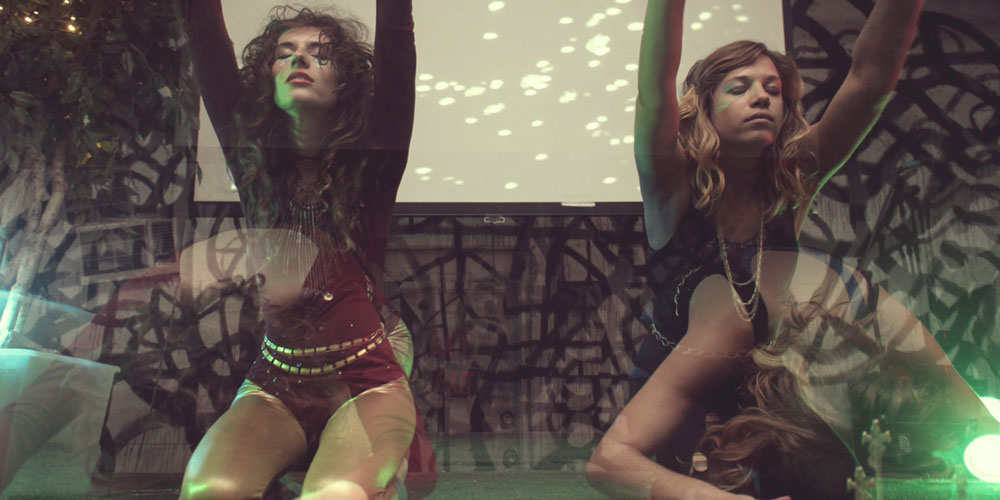 Prince Rama thinks the evolution of music is drawing us closer to the apocalypse.

I went and saw Prince Rama speak in a classroom at Melbourne University a couple weeks back. If you don’t know them, they are an average psych-synth Texan duo based in Brooklyn who seem to like American mysticism. They were really poorly organised for their performance- an ironic PowerPoint on pop culture and nostalgia. In its alternate versions, it apparently involves an intricate light show and more costuming. In a dim classroom, with the help of a student’s MacBook and its inherently crappy speakers, the performance finally began after we waited for forty minutes. We were huddled at the front of the room. Half of the duo, the only performer, wore a quintessentially overly trendy Brooklyn outfit- a black and white star unitard, a beige seventies fur vest, black platforms, neon socks, a big red and a black plaid shirt. She had roughly twelve bindis glued down the middle of her forehead. Her hair was curled like Fara Fawcet. She was wearing an article of clothing that fit neatly into every musical decade she discussed.

She talked about black holes and apocalypse in a philosophical performative lecture on the direction of pop culture. She gestured towards her PowerPoint presentation and explained that the evolution of music is drawing us closer to the apocalypse, and that ultimately pop music is the apocalypse. She was appropriating the voice and poise of a New Age American Buddhist cult leader. It was interesting. It was also funny. But, it was also convoluted and pretty shallow. It was lost in its cheeky PowerPoint nineties New Age aesthetic. It was non-conclusive- not that performance art need be conclusive-but it seemed to miss where all of the facts were stemming from. In short, she discussed the speed at which we are growing nostalgic for different decades of pop music. She used big cheesy photographs of past pop stars to make her point. But, the performance failed to discuss that this nostalgia for the past is the result of being overly exposed to it. We are no longer rifling through our parents’ old records and shoes to understand the 70′s, we are streaming videos, even rare mix tapes, in the matter of minutes, off of our iPhones. We are steeped in pop nostalgia because of our access to pop’s past. And, this access has been granted to us by the Internet. She was really talking about the Internet and its subsequent mishmash of trends, which ultimately, given her outfit and her characterisation she had clearly fallen victim to (and I don’t think this was a critical move).

The performance wasn’t exactly aware of itself, but I was excited that she had brought up the contemporary tipping point of merging aesthetics and the current overwhelming bout of collective nostalgia for an earlier digital age. Applied to the contemporary art world, it seems that this collective nostalgia has been compounded by current aesthetics including both digital and Internet based trends. It is the lack of sincerity and awareness and the capacity to say something new within these art trends (in art, design, fashion etc.) that I am interested in.

I saw Cory Archangels‘ retrospective at the DHC in Montréal last year. If you don’t know him, he makes videos and images from computer software programs and memes. He is the trendy hacker rebel of the contemporary art world. His works are interesting, but I continue to wonder- why date your art intentionally? And also- why are we nostalgic for cat videos and musical tutorials already? Why don’t we talk about something else? Is this really the art we are connecting with? Our love for memes and YouTube? It was a packed fashionable opening, as you can imagine. Beer chilling in little carts. Tons of knee-highs and plaid. Everyone thought the exhibition was fantastic. The DHC is one of my favorite galleries and yet, I still couldn’t understand why they didn’t have this exhibition five years earlier- when this kind of work wasn’t already littering the art world. And less kindly, I questioned why this was deemed an important exhibition to have in the first place. It was cheap and pretty uninteresting. The work was accessible but it wasn’t deep or complicated. What was more interesting than the videos was thinking of how lonely a process hacking games from your childhood in your basement could be- how bored with the present day you must be.

What I think is happening is that many people are neglecting to see that the language of the Internet and early video games and programs is a language. And at this point, with only a couple decades behind it, is it really an interesting enough topic on its own? It is a new collective language, meaning that it still limits the expression of its users. Its signifiers or tropes are powerful but aren’t yet anything more than open symbols of communication and they too will become dated as technology continues to develop. But at this point, these symbols are the ones we most strongly identify with. You know what I am talking about. The seductive graphics of an early 90′s childhood, overlaid with the cats that gyrated (slowly) on early MySpace pages. The tacky limited fonts and colours associated with early coding, the Photoshop colour gradient and the capabilities of MS paint. Fashion from early music videos, the list could go on. These tropes can speak to us, but often don’t say something entirely new. Not yet, anyway. We are familiar with this language, but what characterizes it most is its limitations. What it can’t do. And what it still can’t say. How cheap and superficial it still is.

The art and aesthetics that have emerged from the digital world are creating a collective allusion that we must all miss the past. And perhaps we do, although some of us don’t even remember the nineties. We are all plugged in, but we likely aren’t more connected to each other. The fact that it appears that we’ve grown nostalgic so quickly for the time before we were plugged in is indeed disconcerting. Dissatisfaction is breeding grounds for nostalgia. Maybe we are just becoming more antisocial and thus quick to reminisce for the human interactions that defined childhood- the other player in Mario, or the neighbor (whom you never actually liked) that was squished next to you on the couch while you watched the Simpsons. Your older brother, like mine, may have been looming in the background, downloading Napstar files or porn on the family computer.

Maybe this bout of digital nostalgia that is impressing upon our current day aesthetics is simply a reminder that we need to think about human interaction differently whilst living in a hyper digital world.  Perhaps we need to start questioning how complicated and dependent our relationship with technology is becoming. If digital trends are clearly bringing forth aesthetics that the world was happy to leave behind (shitty graphics and rave clothing among them) why don’t we talk about the deficiencies of the digital world and our human interactions before and without the Internet. Nostalgia, even if it is an allusion, is a portal to ‘better times’. And if you do consider the dial-up decade better, then ditch your smart phone for an afternoon, and ask yourself, do we really want empty and confused trend driven nostalgia to define the aesthetics and art of today?

For our latest Carla’s Corner the lovely Carla Uriarte takes her illustrated series onto the world of GIFs, we have way too many Tumblr tabs open to not…