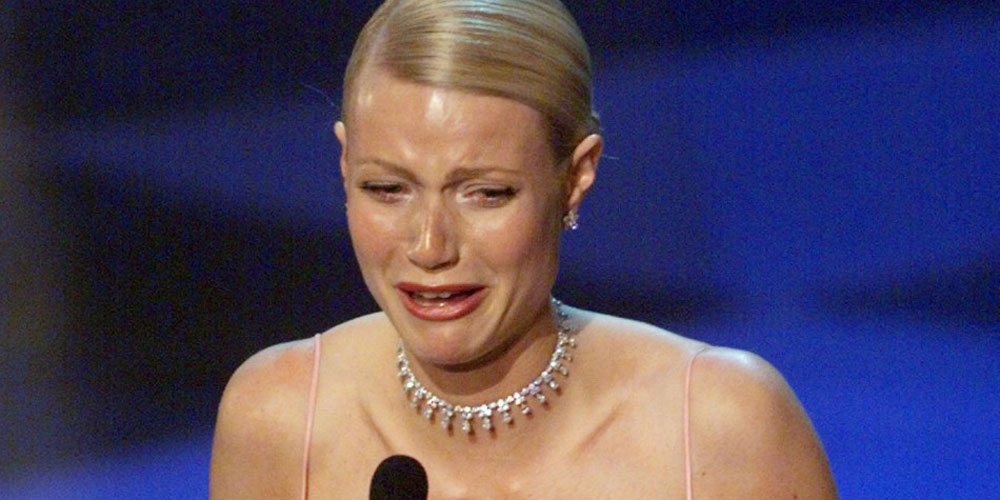 I was recently devastated to hear that the planned Vanity Fair ‘takedown’ piece on Gwyneth Paltrow had been abandoned due to the actress’s offensive against the magazine. I was upset partly because the news led me to the Daily Mail website which always leaves me feeling grubby and stupid (sample comment: “Paltrow just wants paid for the cover”), but also because for 18 years now I have almost obsessively loathed Gwyneth and was dismayed to be denied this glimpse into her (hopefully) dirty little secrets.

I first saw Gwynnie in movie theatre in 1995. Partway through the movie Se7en, my movie companion leaned over and hissed to me “She’s dating Brad Pitt in real life”. Her? I thought. But she’s so… smarmy. It was the following year that this blonde beauty really started to irk me though, when she appeared in the lyrics of the Lemonheads song 6ix (for those not in the know, the refrain goes “here comes Gwyneth’s head in a box”). I was deeply in love with Evan Dando at the time and was super confused as to why he would chose to write a tribute to her instead of me. Sure I was a chubby accidental-goth with permanently infected earring holes (only with time would I accept that I look awful with dark hair and am allergic to ALL jewelry, even ankhs), but I had scads of inner-beauty and warmth, whereas Gwyneth seemed so cold.

My dislike for GP grew steadily over the years and became famous among my friends. My pal Kristina in the late 90s even made me my own piece of Gwyneth hate-art – an accurately rendered sketch of Ms Paltrow winning the Oscar in that god-awful pink gown, her face forever frozen in a silent grimace of emotion, like a modern-day Eve being expelled from the Garden of Eden. I would look at that picture and chortle at her bony chest and distressed face.

When Gwynnie launched Goop, her online lifestyle publication, I nearly peed my pants with glee. Suddenly I had access to the inner workings of Gwynnie’s mind! I had always suspected her of being sanctimonious but now I had proof that she thought she was better than us and could actually subscribe online to her conceit! (If you’ve been living in some kind of bubble made from tap water and generic non-organic dishwashing liquid, Goop is the always hilarious and monumentally out-of-touch soapbox Gwyneth climbs on to tell us scumbags how to live our lives.)

Something weird happened to me earlier this year though when my sister gave me Gwyneth’s latest cookbook. Amidst some of more cockamamie advice (such as a ‘recipe’ for avocado on toast that, in summary, requires that you put avocado on toast), there were actually many recipes that I truly liked. I made them for friends and they liked them too. I couldn’t believe what was happening. Suddenly I was taking advice from a woman who once dressed in a fat suit for a movie role and had said she’d rather die than let her children eat cup’a’soup? Everything got really weird for a while and I spent a few weeks clutching the edges of furniture and mouthing silent questions towards the heavens. I had to ask myself, all these years thinking I hated her, maybe I actually – dear god – loved her?

I tried to pinpoint what it was that I had hated about her. Was it that she was obnoxious? I’m going to be honest here, I’m super obnoxious. I constantly correct people’s erroneous language usage and I get very competitive at Trivial Pursuit. Worst of all, I am a vegetarian.

I have always guffawed at how out of touch GP is with the real world, as evidenced in her recommendations to Goop readers. Her Christmas list of ‘must-buy’ items is now up for 2013 and I fully expect to see a pair of monogrammed, grain-fed reindeer on there this year. But can I really judge this when I have just knowingly taken my credit card over its limit buying designer pajamas for my three-year-old niece? Can I really hate Gwyneth for being out of touch with the budgets of the commoners when I myself am guilty of the same thing, despite being one of said commoners?

Even though she was born into Hollywood royalty GP is still a damn hard worker, exercising for something like 17 hours a day under the tutelage of Tracy Anderson. Have you ever done the Tracy Anderson Method? I have. It’s so fucking hard it leaves you dry retching and spasming on the floor. Anyone who can commit to this level of physical activity deserves the respect of the public at large.

I believe that activating almonds and other dried foods is a worthy pastime, as does Gwynnie. Before I read her new cookbook it had never even occurred to me that goji berries should be activated. I can’t express my embarrassment that for the last few years I had been putting inanimate superfoods in my green smoothies. GP would probably approve of most of my food choices, and as I write this I am eating a ‘cracker’ made entirely from dried vegetables (spoiler: it tastes like scabs but makes me feel smug and in control of my life).

As my unease and confusion has passed, I have been left with a feeling of inner-peace not unlike the serenity Gwyneth probably feels after smoking her once-weekly cigarette on a Saturday night (what a great idea, I do this too but sometimes I save them up and borrow a few weeks into the future and have, like, 30 on a Friday). Turns out, I do love Gwyneth! I love her apple-scrubbed cheeks and her wisdom. I adore that she’s loving and non-judgmental and not afraid to describe herself as such. I love that she’s a European trapped in an American’s body (I can SO relate to this! I’m an Australian trapped in a New Zealander’s body!). Listen up, Gwyneth’s great, and I challenge anyone to try her Green Goddess dressing and then tell me otherwise.

Welcoming back the Noughties with Marques Almeida

I always wonder how many more possible ways denim can reform to win us over every season. A core fabric on the catwalk trickling…