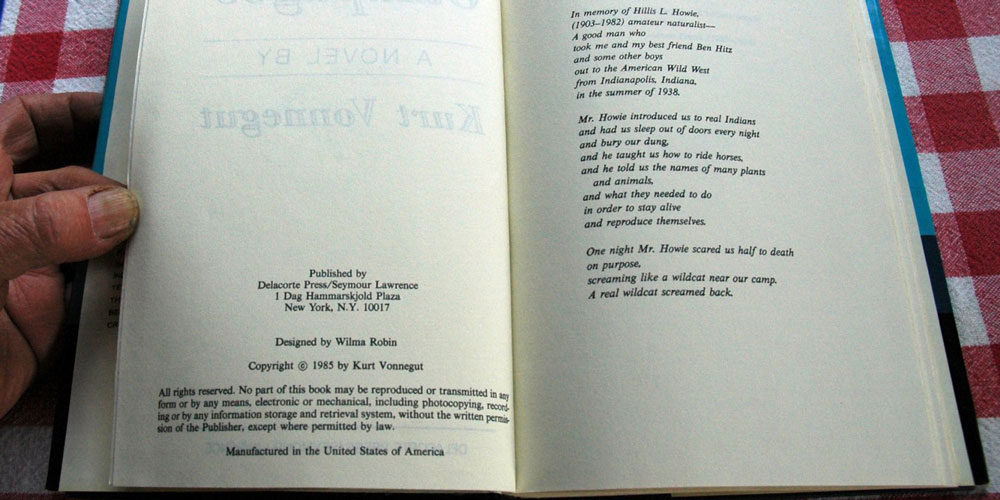 Book clubs are so awesome, in theory. We would love to tell you that we’re the proud members of some super cool cheese and wine fuelled literary society but to be honest—they’re harder to maintain than a blunt fringe. After admitting we’d never be able to organise a group of attractive readers in one place on the reg we’re running this column instead and asking the women we love to nominate a book they think you have to read. First up to the imaginary lectern is Kat George.

Kat’s an Australian born, New York based writer who has found a lot of success talking about sex to girls who don’t want to be Carrie Bradshaw. Her articles have appeared on VICE, Portable, The Thought Catalog, and so many more places I’d get tired hands typing them so just go here. This year she’s added a few more lines to her resume with her venture into webisodes, Big Gulp; and the publication of her first ebook Pink Bits. If you love vaginas, yours or someone else’s, that’s a must read.

I am a huge Kurt Vonnegut fan—Slaughterhouse Five is the kind of book you should read and re-read and let absorb into your psyche until it’s part of you. But as necessary as his classics are (Cat’s Cradle is wonderful too), his smaller, lesser known works are of equal value, and just as magical to immerse in. Galapagos might be my favorite Kurt Vonnegut book, Slaughterhouse aside. It’s equal parts cynicism and mysticism, in that unique Vonnegut voice. The man is a master of perspective. I don’t think any other writer I’ve ever read sees the world as Kurt Vonnegut sees it, and I think we could all use a dose of the knowing, bemused optimism of Vonnegut’s inner mental mechanics. If you get a chance I’d recommend sitting down with some of his interviews as well—he’s incredibly insightful and wickedly entertaining. Except he will definitely make you want to smoke cigarettes (and never use a semi-colon again). Lots and lots of cigarettes.