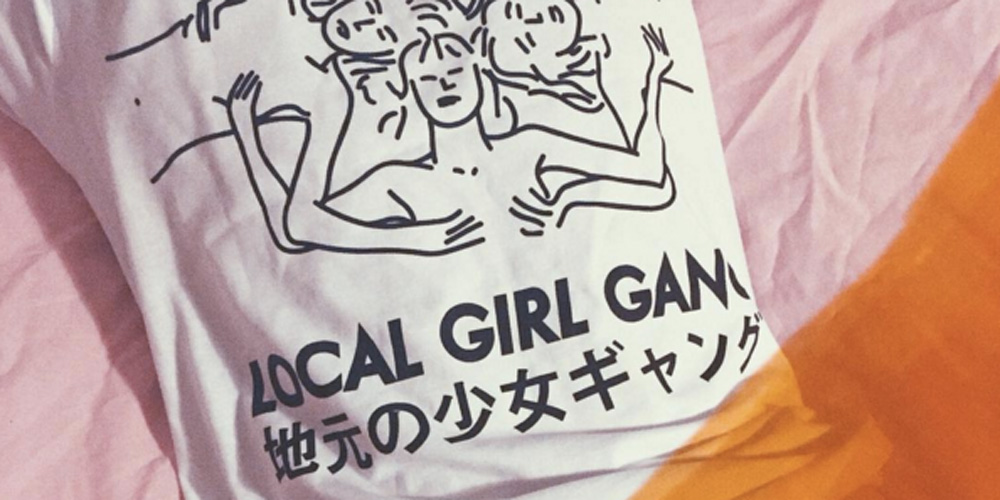 Earlier in the year, a Sydney based t-shirt brand called Local Girl Gang popped up on my Instagram trawls. ‘Cool, a new feminist upstart to support’ I thought. But as I scrolled through their feed—beautiful white models lounging around in t-shirts and nothing else, interspersed with hyper-sexual cartoon figures and vagina-like fruits—a sense of unease began to set in.

At first glance, the brand’s marketing could easily be taken as a feminist celebration of the female form. That is until closer inspection, when you realise the brand is run by a skater dude (more on this later) who’s leveraging his range of t-shirts with pastel toned, soft focus bodies, “female-empowerment” rhetoric, and gross white-foreigner romanticisations of Japanese culture.

I wrote a polite email to them explaining that “Jap” is a racist term. Despite not being ethnically Japanese, I had been told enough times by numerous Japanese people that the term is a relic of WWII and still considered to be offensive; all in all, not a cool way to market a product that apparently takes inspiration from Japan.

I received a sincere apology from “Kayle” who described Local Girl Gang as a personal creative outlet, acknowledging the mistake and promising to change the title of the collection. At this point, I was still under the impression the label was run by a group of women.

I wanted to launch into a longer, more complex reply, questioning the brand’s Instagram that seemed to trade on some classic fetishist ideas of Japan. But I decided to let it go because I know what it’s like to be a fledging label, and was hesitant to cut down the work of a bunch of local women.

So I started writing this article to question pop culture’s fascination with foreign language characters, but the more I revisited the Local Girl Gang Instagram, the weirder it all felt. A bit of background Googling revealed the personal Instagram account of “Kayle”—full name Kayle Lawson—who I realised was the sole white male designer behind Local Girl Gang. There’s scant overt promo of Local Girl Gang on Lawson’s personal Instagram, but the proof is there, albeit a couple more scrolls further down than I’d like to admit. It then became apparent that this dude was trading on the online feminist aesthetic to sell t-shirts. And shit, he was reducing an entire culture in the process.

He’s certainly not the only one. Just last month, VicRoads informed me that it is now possible to “honour” my car’s “heritage” with Japan themed car plates that display the Kanji for “Japan” next to “VIC” (yeah, that makes zero geographic sense to me either). While I was flipping through the newspaper at lunch today, I was greeted with this Schweppes ad.

Japanese characters may be the current ‘foreign’ language script of choice, but we’ve seen the ‘appreciation’ of others before. Both street wear and health goth had a brief flirtation with Arabic, and who could forget when mangled Chinese proverbs were considered body art?

The thing is, when pop culture chooses a new aesthetically pleasing script to use, the results are nearly always the same: people outside of the originating culture use the language inaccurately (side note: stay away from Google translate), often while using archaic stereotypes.

When you translate English words to another language for aesthetic purposes, without moving design forward in a way that engages the context of the culture, there’s an underlying racism. When you’re simply cloaking words in a supposedly alluring mist of exoticism for whatever product you’re making, you’re playing on shitty orientalist ideas of an entire culture. You’re playing on stereotypes of the fantastical ‘otherness’ of a culture, an idea that has historically erased peoples’ humanity. Basically, ‘born free’ won’t be elevated to Keats level if you write it in foreign language script. It’s different when somebody from the originating culture expresses their own exploration of their heritage.

To be fair, I’ve spotted the use of Japanese characters as an aesthetic in other independent Australian labels—Brisbane’s House of Cards  and Melbourne’s Fun Apparel—and called out neither. I let both slide because they struck me as a less insidious use of Japanese culture and more a by-product of foreigners being raised on and obsessed with Japanese kawaii culture, a legitimate thing ever since Japan’s government looked to increase its international power through spreading cultural products.

What leaves a bad taste in my mouth about Local Girl Gang is that they’ve both used fetishist ideas of Japan in their marketing and hijacked the feminist lexicon to make their $50 t-shirts look ‘cool’.

Interestingly, the brand has reblogged photos produced by female photographers in their feed, notably Prue Stent, and collaborated with a number of local female artists.  But in light of everything, to me even this comes off as insincere as ever.

We’re seeing a slow creep of the commodification of feminism—think of those $70 Whistles t-shirts in the UK  that were produced by women in unethical conditions. More than ever, we have to be hyper aware of the feminism we’re being sold – that’s at both the chain store level and at the local independent level.

Instagram has functioned as an incredible platform for women to share self-made images and represent our own bodies. It has also been a political battleground against the censorship of female bodies. Indeed, depicting female bodies in their natural state can be subversive. But when those images are being filtered through a male-gaze, when someone is profiting off feminism and in the process infantilising an entire culture – none of that is subversive.

Words by Emma Do

Blog Of The Week: Kaapstad Kinsey

Laura Windvogel is a South African woman who likes to talk about sex. In most countries that makes for a good dinner companion, but…