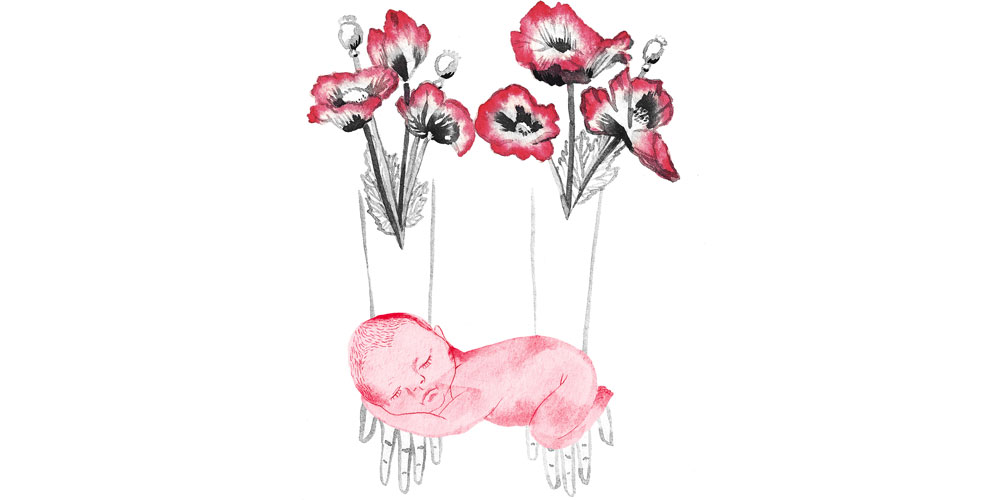 Following the brilliant response we received for Laura McPhee-Browne‘s story Cadency we’re so happy to be able to follow it up with another piece of her original work.

The baby was in the bed with her now. She had her arms around its impossibly tiny body and its warm head close on her belly. The girl, for she was only a girl and not a mother despite what the nurse had said, was cold and knew the baby would be too. She’d no heating in this flat, just piles of paper and clothes which she sometimes considered throwing into the fireplace and setting alight for the warmth. Instead she lay still and considered her heart. Imagined it inside her chest so still and strange. The baby was 10 days old and the girl’s heart didn’t pulse for the baby. Though she would hold it close for now.

The girl had lived a sort of heady life – out of home at fourteen then heroin to show them, heroin to please him, heroin to pretend until now. She was so young and had known more about the bitumen than herself, how it melted in the Melbourne summer and stuck to her shoes as she sat, nodding near the park at midday. The girl’s shoes had electric yellow curly laces that she had stolen from Big W near closing time on a Saturday night. They made her smile.

After 2 the girl got out from under the covers with a sweaty sheen on her chest. The baby was dribbling and felt too hot so she brought it to the sink for a sort of bath, letting the cool water drip through her fingers onto the baby’s belly button and fat kicking legs. The girl tried not to think about how she had felt before the baby was born, purple and red from her vagina. The appointments at the clinic had begun each time with a sit on the ratty chairs in the waiting room, her hands clasped over her big stomach and a flushed smile on her face. Each appointment seemed more real than anything else and she loved the way the doctor would talk to her, soft and clear and exact, telling her about how her child was faring inside of her and what to expect upon birth. The warmth of her body from the baby inside had helped her to stop being sad and she thought that perhaps this was what she was going to be; a young and capable mother, wheeling her pram and cooing to her babe amongst the throng.

The girl’s friend from her job at the petrol station called in at 3 (in the hour between 2 and 3 she had sat far away from the baby or held it close to her, trying to hear something) and said she looked like shit and why did the baby have no clothes on, not even a nappy? This had been the least of the girl’s worries. She had planned to dress the baby only if they had to leave the house, but now her friend insisted that she shower and they walk, to air out the smell of stale powder and scalp.

She couldn’t tell her friend even the beginning of her thoughts so she asked weak questions and nodded for long answers until they got to the chemist and she was free to busy herself with the formula tins and bottles. The girl’s breasts were not feeding the baby. The breasts that the boy had savoured, that she cupped in the night for comfort, that sat, spider-veined and plump behind her singlet. She had already begun to know that her child was a pretty one. The pharmacists could barely keep their hands from plucking the baby from her nest, and as she pushed the pram down the street she saw the raising of eyebrows and blooming of smiles as people peered in to see the baby, and heard screams of adoration and breathy sighs.

Back at the flat the girl said a mustered-up goodbye to her friend and then sat opposite the pram and looked at the baby. The baby looked back and gurgled. The girl rubbed her arms and shivered, it had cooled off since the heat of the afternoon and the light was disappearing outside. She was not hungry and had fed the baby a bottle with her friend, so she thought of another walk and rugged the baby up to take her out again. Getting down the stairs was hard, and the lift hadn’t worked since the girl had lived there. She decided not to take the pram and wrapped the baby against her chest with the sling her work had given her, ready to feel what might happen in her heart with her baby so close. The girl walked quickly down the stairs with her chin touching the baby’s downy head. She walked them around the neighbourhood streets in a pattern, hoping this might help the baby in some way, that perhaps a sort of rhythm would help the baby to feel safe.

The girl hadn’t walked past the church on the corner with the baby until that night. It was a cracked blue building and stood taller than those around it. The girl remembered back to a year ago when a newborn baby had been found outside this church one morning, very early. When she heard, the girl had pictured a baby lying in the grass out the front of the church, bundled and wriggling, its face wet with dew. The girl sat herself and the baby down on the green slant bench outside of the blue church. She was tired and it was very dark now so they could nap a while, their breaths together bubbling like drowning.

The girl woke later from the baby flapping its little arms and whimpering. She soothed it quietly and picked them both up. She could see that there was wetness on the grass in the church front garden. It wasn’t too wet though, and the grass was soft. She sat down on the bench to wait a little longer.

Did Peggy Get The Ending She Deserved?

So Mad Men has wrapped, and it did a pretty tidy job of it. After 7 season’s Don was delivered in the only way…