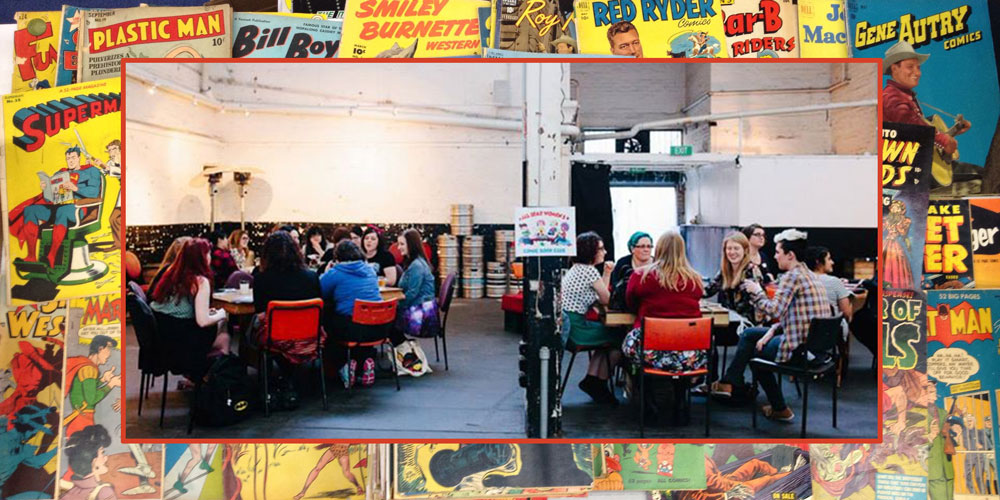 “Hi, I’m Hannah and I like: Ghost World”. Thanks to social media I’m never lacking in things to like, but when it comes to comic books, I’m pathetically out of my depth (unless of course I’ve seen the trailer for a new superhero movie). Expecting eye-rolls at my name tag, I wander into the third All Star Women’s Book Club meet-up , only to be warmly greeted by females with tags reading that they like Captain Marvel, Sex Criminals (not the offenders, ha!), Batman, Sin City and The Crow. Also, everyone I meet is excited that I like Ghost World, because they like it too.

Before I know it, I’ve discussed the morbid details behind the making of The Crow film, overheard a heated discussion about how the new Gotham show sucks and flipped through a pile of comics, all of which I make a mental note to look into. One in particular, Velvet, catches my attention. Based on the idea that maybe a Miss Moneypenny type used to be a super spy during the cold war, I barely tear my eyes from the pages to re-engage in conversation. When I emerge wide-eyed, a fellow attendee laughs and says ‘Don’t worry, there’s a certain point at these meet-ups where everyone’s just engrossed in a comic.”

Women are chatting all around me about that month’s book, Captain Marvel (though there are separate tables for those who don’t want to focus their discussion on the month’s book) and from what I can sense, very few know each other from outside the meet-ups. Although I am no longer a teenager, from what I’ve read, this is the same sturdy foundation that Rookie magazine meet-ups offer for girls to come and make friends based on similar interests (and what could be a better start to a friendship than knowing you both have strong opinions on the new lady Thor?)

Similar to Rookie meet-ups, the All Star Women’s Book Club is becoming a much larger affair than anyone anticipated. The second largest in the world of its kind, the meet-ups have surpassed the handful of girls meeting up in the corner of All Star Comics on Lonsdale Street that club founders Cazz, Naja and Soph imagined. I caught up with them the next day to talk about what happens when you create a space for females to talk about comics.

Hannah: So, I totally freaked out thinking everyone would think only being into Ghost World was cheating…
Cazz: That’s great! Movies have been so important to bring in a bigger community to comic books and make it more socially acceptable to sit reading them on the train or that kind of thing. It’s become quite normal now for that to be reading material because of the hype around those movies.

Soph: You can go into Target now and see clothing with comic art on it or anywhere on the high street really. It’s totally permeated everything.

Soph: (laughs) Exactly, you’re not weird for reading The Avengers on the tram anymore. I mean, I like being nerdy, but it’s not about that anymore.

Oct was your third meet-up, so how did this all start, and how is it going?
Cazz: I found these guys through comic books! They both came in (Cazz works at All Star). It was my first day and I was really nervous. Naja and Soph are probably my favourite customers. They were always just so talkative and friendly to me. I had always toyed with the idea of a women’s comic book club with them, and they were the first to grab onto the idea and really say ‘yes, we can do something with this.’

Soph: When we first started we thought it would be a dozen people in the corner of All Star, and now we have to bring it to 1000 pound bend.

Naja: I should probably give credit to my friend Tara who I have a comic reading group with at University and who wanted to have a Marvel reading group. Except that reading group was like four people, and this is like sixty people!

Soph: The meet-ups are ostensibly a reading group, but more than that, their purpose is for women to talk about comics they love. You hear girls talking about comic plots but also about different comic artists they like. It’s more about sharing and recommending comics.  We set it up to have zero pretention. I like that everyone knows a little about something, or some know that little bit more than you but you know more about something else.

Naja: So often for women it’s about finding that entry point to getting on a level, or being able to participate on a certain level. So it’s important to be welcoming to everyone. When you’re looking for or talking about comics you’re often the only girl in the room. So it’s funny to see the girls have apprehension about ‘is this okay to like?’

Is there a female comic book character focus?
Cazz: Sort of, not on purpose at this stage. We’re trying to keep the idea of the club going through the comics. We’re about females getting into comics and making it easy for them to do that. So, not entirely on purpose there’s a lean towards female characters and writers.

Soph: Girls do like reading about other girls though. Over the last eighteen months there’s been so much discussion about ‘the place of women in media blah blah blah’. And I think that’s what has made a lot of female creators reach out to their female fans.

Cazz: There are comics for everyone now. A lot of the reason women weren’t reading comics was because there was nothing really for them, or anything that interested them.

Naja: I mean, there were always women who were into stuff like The Punisher, but there’s never been a space for them to talk about it. It is what has been so great about social media platforms. They have allowed women to network with each other. There are so many women saying to each other ‘I thought I was the only one who read Green Lantern!’ And a big part of the club is putting a face to that realisation. I mean, I would love to write comic books but there’s the perception that it’s all done by male writers.

Cazz: (to Naja) Pick up a pencil and write my friend!

Naja: We really want to show people that we’re not just consumers. It’s about being creative as well. The women focus thing though, it would have been counter-intuitive to not start off with that focus. We haven’t run out of great things created by women yet.

Soph: The best thing is seeing girls make friends at the meet-ups, and they go off and do their own thing and come back and hang-out.

Naja: Exactly, there’s never just one writer in the industry or one girl in the store. It’s so much bigger than the sum of its parts.

The next All Star Women’s Comic Book Club meet-up is 9 November  at Thousand Pound Bend. If you’re heading down check out their discussion book ‘Rat Queens’.

Miss Destiny Know It’s Better To Be Cool Than Hot

Miss Destiny are exactly what you want in girl band*: tough, cool, and talented as all hell. Too often women in music are put…