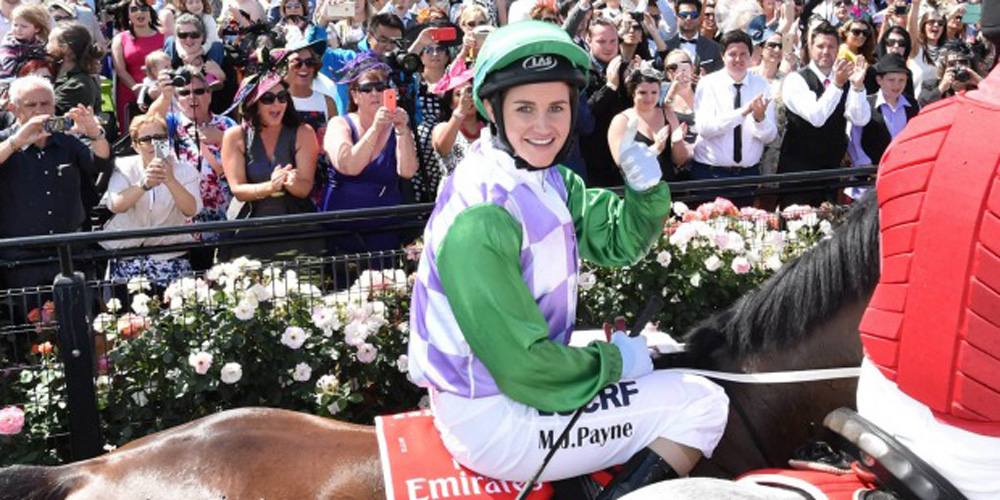 Today, for the first time in its 154 year history, a woman won the Melbourne Cup. Michelle Payne and Prince of Penzance took first place against 100-1 odds.

But this isn’t an article about a woman breaking through a glass ceiling. Usually before going on, I’d give her a measure of congratulations for making it in a sport that has been dominate by men for centuries. But the cruelty and trauma those horses are put through, Michelle’s horse was most definitely put through, obscures any gender strides that were taken today.

It doesn’t matter if a man or a woman is riding the winning horse. Everyone who is involved in horse racing supports a pastime that pushes animals to extremes that are so far removed from their natural behaviour their body is literally ripped apart.

Prince of Penzance may be a prize today, but this is what that animal was put to off camera, when the crowds weren’t cheering.

He would be stabled for most of every day, apart from when he was on the training track. This is done to ensure the horse’s training and diet can’t be disturbed. But horses are social animals— without socialisation they can develop stereotypic behaviours, such as crib-biting (biting on fences and other fixed objects and then pulling back, making a characteristic grunting noise, called wind-sucking) and self-mutilate.

He would be fed on a field of grains rather than being allowed to graze naturally. This can lead to gastric ulcers, 89 percent of horse have these ulcers. They can be so deep they bleed into the horse’s gut.

Before he even made it into the track, the intensity of his training would mean he may have suffered torn ligaments and tendons, and dislocated joints.

Racing as hard as he did today can cause many horses to bleed into their lungs and windpipe. After major races like this, a University of Melbourne study found that 50 percent of horses had blood in the windpipe, and 90 percent had blood deeper in the lungs.

Prince of Penzance is a hero today, but all he needs to do is damage one of those million dollar limbs to be worthless. Despite his recent fame, the truth is very few Cup winners retire to graze in the country. When a horse is injured or can’t run fast enough to bring home prizes they are “discarded”.

Horses destined for slaughter will likely end their lives in knackeries where they’ll be processed as pet meat. Over 25,000 horses per year are killed in this way in Australia.

To allow people to paint this as a win for women, feminism, or equality is gross and patronising. Recognise that people are hijacking our cause to obscure one of our country’s most traumatic traditions.

Feminism is above all about respect. These people don’t respect these animals. And they don’t respect you if they think you’ll be swayed by this shit.

For more information or to become more involved in this cause visit Horse Racing Kills.

Previously: Can’t We Wear Hats And Get Drunk Without Killing Horses

For our forth and final instalment of Gallery Girls we talk to Melinda Martin, Gallery Director of the public art institution Linden Centre for…