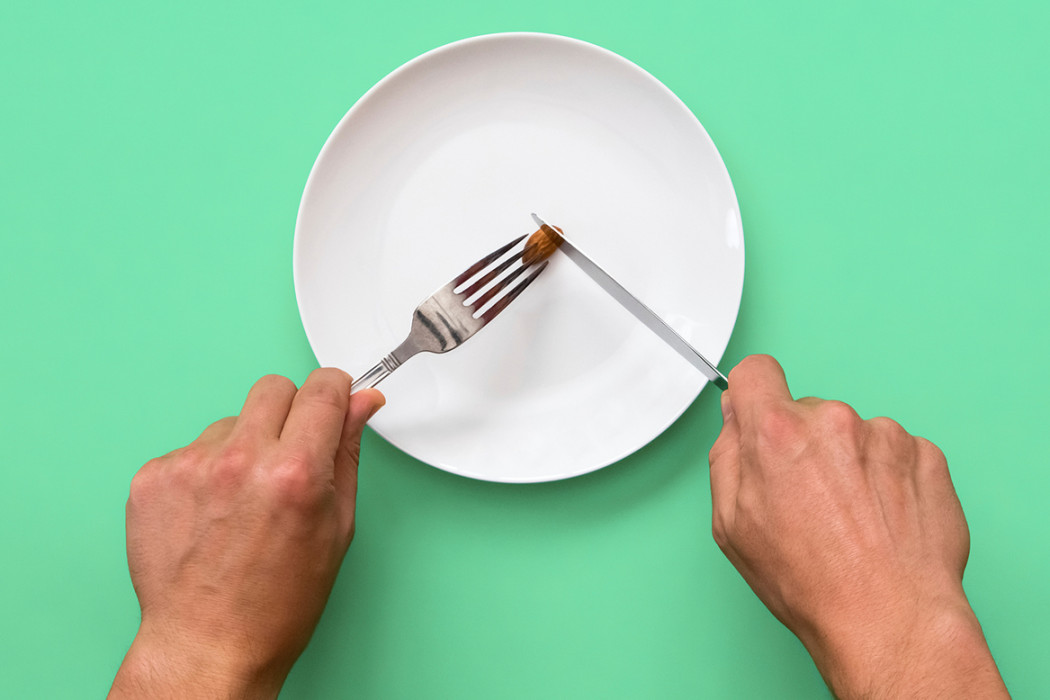 When I was about ten years old – gangly, ravenous, messy-haired – I read an article in a dental surgery waiting room about twin sisters. The young women pouting off the page looked bizarre, like insects or aliens, and I felt bad for them because they were dying from a terrible illness. I sounded it out in my head – anorexia nervosa. It was written in italics, so you knew it was a serious disease.

I have felt a sense of fear towards food for a long time. I have skipped meals, or thrown them up. I have lied to people I love and performed elaborate charades to hide the fact that I am not eating as much as I appear to be. I have glared at myself in the mirror, hurling insults internally and verbally. I’ve scrolled endlessly through ‘thinspiration’ images online, using jealousy as an appetite suppressant. I have bought books and scoured magazines articles about people recovering from eating disorders just to learn how to motivate myself to stay hungry, and how to hide the fact that I could not bring myself to eat.

I was never deemed dangerously underweight by a medical professional. I never collapsed in a public place. I didn’t have to be hospitalised, or see a nutritionist, or be taken to a counsellor. A part of me knew that I was unwell, but not being “sick enough” only made me feel more inadequate and drove me onward. Even when I realised that the fear and obsession were consuming my life, I felt unworthy to ask for help. Not sick enough. Not thin enough. Not enough.

When I was sixteen, a boy texted me a photo of how he thought I could look “with a little work.” The girl in the photo was wearing expensive lingerie, blonde hair blowing over her stark collarbones, leaning in a way that exhibited her hourglass figure and just-visible ribs. Years later, I would Google the image and discover that it was Candice Swanepoel, one of the Victoria’s Secret Angels. But in the moment, despite having hit puberty only a few months before, I felt a deep sense of shame that I didn’t measure up.

I began to view every dance lesson and walk to the mailbox as a way to burn calories. I didn’t even know what calories were for a while, just that you were supposed to burn and count them, not eat them. I developed an irrational fear of food and would physically shy away from it, as if I could consume calories through proximity. If the gnawing in my gut wasn’t hunger, it was guilt that I didn’t feel hungry. That subdued pain became a constant and beloved companion, something that I could control in the average uncertainty of being a teenager. I still have to fight against the jolt of dopamine that I get when I feel hungry, because it is tempting to fall back into old habits. The battle against my brain is no longer every moment, or even every week, but it is ongoing.

The problem with recovering from an eating disorder is that it doesn’t feel like recovery. It feels like giving up. It feels like walking away from something that you have poured hours of energy and effort into, because it takes an enormous feat of willpower to refuse food when your stomach is being clawed at from the inside. When you’re in that headspace, it feels like an act of self-love. It takes time and a big step away to realise what you are doing to yourself, and to the people around you.

I have always felt a tug-of-war between my desire to be taken care of, and my fear of reprimand for doing something so foolish. Sometimes I was filled with desperate hope that someone would discover what was happening inside my head and make it stop, that I could be looked after if I could only find the words to signal for help. I know that it could not have happened like that – this is my mind, my body, and my responsibility. But that doesn’t mean that I have to do everything alone, or deny my experiences to myself. This is my story, and I cannot be afraid to tell it.

Even now, writing these words, I am very much scared that people will read them and disagree. That they will think I am a fraud, because I was never that thin. I’m scared that they are right. In photographs, even at my lowest points, my cheeks are not sunken and there is no peach fuzz on my skin. From most angles, I look very healthy.

But the way that other people hear your story does not determine its validity. Struggling with yourself is only human.

Once I found a way to admit my fears I realised that, not only was I not alone, but I was surrounded by people – beautiful, brilliant, intelligent people – who were struggling with their own fractured relationship to food and their physical appearance. It is not an easy thing to talk about, especially when you feel that your story is less valid or interesting than someone else’s, but it is an important discussion to have. Talk until your voice is hoarse, because silence hurts more than a difficult conversation.

The public’s obsession with James Franco’s sexuality has always been a study in our own hang-ups. Since he emerged on the scene post Freaks…