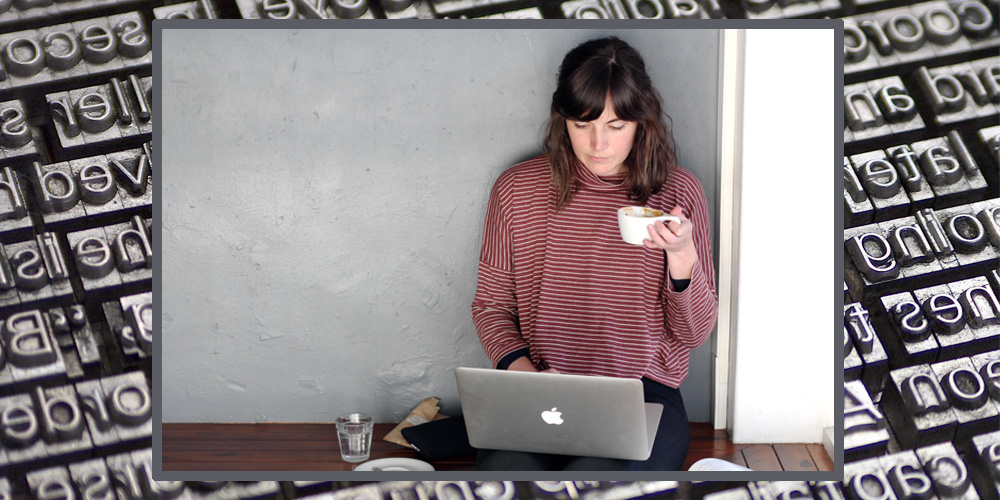 Even among grammar dorks, Meredith Forrester is a hero. An editor at Melbourne’s The Good Copy, she’s also a freelance copy editor; you’d struggle to find anyone else with such an extensive and nuanced understanding of dots and dashes. But don’t get the wrong idea—she’s no grammar troll. Rather, she loves the way we write and speak, and wants other people to think about and engage with it too.

As one of the big juicy brains behind The Good Copy’s (surprisingly fun) short grammar course Stop. Grammar Time., she knows it’s important to understand what you’re doing, but also that it’s not worth sweating the small stuff.

We caught up with her to chat about falling in love with writing rules, and learning how to break them.

How did you become a copy editor?
I did design for eight years, and realised I liked working with typesetting and was more interested in the dashes and typography. I’d always kind of corrected things—both my parents are teachers; my mum and grandma especially would always talk about grammar.

I did Professional Writing and Editing at RMIT, and it was so great, but a lot of people there wanted to write novels. I was more interested in the actual editing and mechanics: not so much being a book editor, but the visual stuff, making sure all the typography is right and the punctuation is in the right place.

What do you like about it?
I guess that there are rules and conventions. When you have a style guide you have a set of preferred decisions. I also like making writing flow better.

It’s a bit like doing a puzzle.
I guess I really like asking the writer why they wrote something that way, because sometimes, to the editor, it doesn’t make sense. But then when you ask them what they’re trying to say, you can suggest something else.

Is it hard to pay close attention and make sure you’re reading every word?
It’s hard on screen, but when you read on hard copy you go line by line using a ruler. On screen I blow up the text to, like, 250 percent so I can read line by line. That way you see all the punctuation and make sure all the spaces and lines are right. You’re not seeing the whole piece. Obviously it’s good to read the whole piece first.

What would you like to see writers doing more?
Penny [Modra] taught me: say it out loud. If you can’t say it out loud and it doesn’t sound right, write it differently.

A lot of people are insecure about grammar. What’s the first step they should take to getting that under control? Other than doing the Stop. Grammar Time. course.
I think it’s important to have a dictionary next to you.

Even in the age of spellcheck?
The thing with spellcheck is that it can be American English, and it doesn’t really check for grammar and punctuation.

You read so much writing. Are there things you see people doing a lot across publications that you want them to chill on?I think a lot of the time there is a big focus on yourself. Just cut out the “I”. Think about the audience. I mean, there are so many little punctuation and grammar things, but I don’t know, it’s not an overall thing.

Do you read to relax?
I don’t. I always want to—actually the last book I read was Between You and Me by Mary Norris, the copy editor of the New Yorker. It’s about her whole time writing at the New Yorker. I don’t know, I don’t really read fiction. I always feel guilty about not reading more.

Do you have any heroes?
It’s funny, the people I look up to are just people who are working. People like David Marsh, the production editor of the Guardian—he made the style guide. What I like about style guides is that obviously language always evolves and you have to take into consideration how people speak, and write, and text. I think he does it well. He put out a book last year called For Who the Bell Tolls—it’s about plain English. Oliver Kamm from the Times did a similar thing at the start of the year and released a book all about not being pedantic about English.

Has the tide changed to not being so intense and being open to play with it?
Definitely, and I don’t know if it’s because of how we live on the internet. Obviously you have traditionalists, and that makes sense in some contexts, and there’s nothing wrong with sticking to conventions, but there’s also nothing wrong with writing openly.

There is a weird classist system around understanding grammar. People love to lord it over others.
I think that’s the thing with Facebook: people feel entitled to say their two cents on everything. But isn’t it more important that the writing is in the person’s style and the reader can understand it?

Totally. Why does grammar bring on this reaction?
I don’t know. I mean, I love it, and I know these people are obviously passionate—and that’s great. But I don’t know. Maybe they feel threatened by people who don’t follow the conventions.

Like being part of a dying religion or something—you feel threatened so you have to defend it extra hard.
Yeah. And I do get scared that it won’t matter. But the way I see it is there will always be people who care about it. And it’s important to care, but also to understand the way language evolves. You can sit there and correct everyone, but it’s not really helping. It’s just telling them they’ve done the wrong thing.

For more writing chats, check out our interview with Penny Modra

Larry Leong is a stylist and DJ, but not in the way everyone who works in retail past the age of 30 is. She…