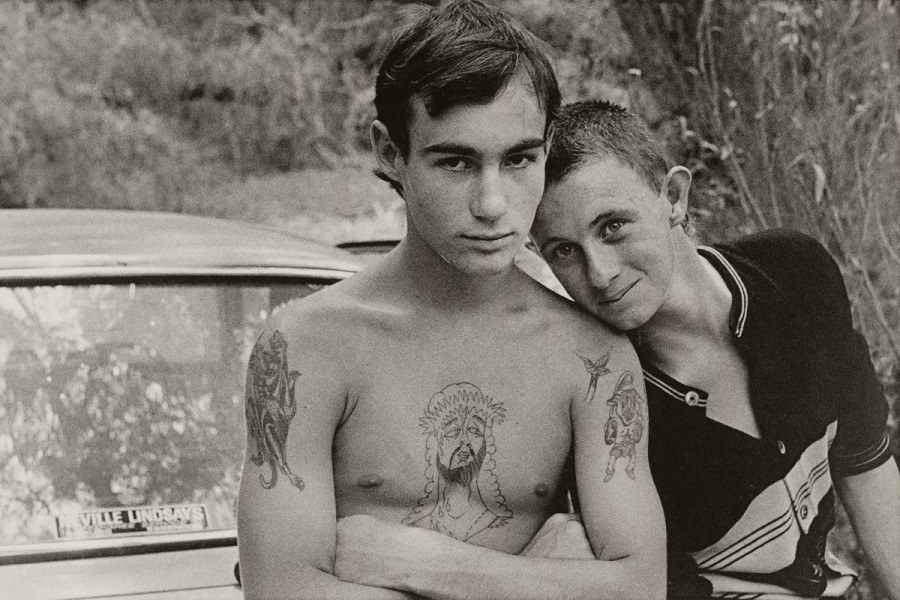 Earlier this year, ABC’s 7.30 Report aired an episode about Australian Sharpies, and asked if they were the country’s “only truly home-grown youth subculture”. The show followed a nostalgic trend of presenting the group as a bunch of scrappy but charismatic teens. Most active in the 60s and early 70s, Sharpies were largely teenagers from poor inner city suburbs. Like British skinheads—from whom they were influenced—they prided themselves on fashion, music, their ability to hold their own in a fight, and their dancing.

While they’re still relevant as a style reference, they’ve also come to represent an idealised notion of Australian masculinity. Dr Marcus Bunyan—an artist and writer who wrote his PhD on male body image within photographic practice—summarises their lingering ethos as representing “mateship and mullets”.

While gang culture now brings up thoughts of underworld killings and bikie violence, Sharpie gangs have come to be viewed as somewhat more honourable. Continuing Marcus explains, “The violence happened inter-gang, rather than against other people. They generally didn’t have knifes, it wasn’t stabbing people to death, it was fights between members of the gangs, and gangs with fists.”

Coverage hasn’t always totally glorified them. In the 70s and 80s there was wider concern over this wave of youth violence and aggression. A Four Corners episode from the time quoted a teenager explaining, “The sharpies always, you know, they hide, send one bloke in, pick the fight, they most probably think we can take care of this bloke, and then they all come out of hiding”. But even then, they would inevitably return to the idea of romance around their behaviour. The same report later featured a Sharpie teen reflecting on the sense of community as, “Everyone’s happy to see you, you catch up, you see [the] latest fashion, latest tattoos, latest black eyes, who’s with who—it was just a real lot of fun.”

But among all our talk of a lost, somehow more honorable way to spill blood in a brawl, another dimension of the groups violence is often lost. One of the most evocative images we have of Sharpie culture is through Carol Jerrems, the late photographer taught many of the teenage Sharps at Heidelberg Technical School. While her photos are of undeniably beautiful boys, long limbed personifications of The Boy, they also carry an unsettling tone missing in much of our more recent group memories.

In the film Girl in a Mirror: A Portrait of Carol Jerrems, Carol’s voiceover describes Sharpies most regular pastimes as “bashing, beer, sheila’s, gang bangs—which is rape—gang fights, billiards, stealing and hanging out”. The photographer herself reported that during her time teaching, socialising, and shooting the teenagers she had “only narrowly escaped rape but was bashed over the head by the main actor while driving my car, which had just been dented by the rival gang with sticks.”

Film maker Rebecca McLean grew up around Sharpies, and they were the subjects of many of her later films. Although her memories of the group are positive, she does describe the relationship between Sharpie guys and girls as, “Girls wanted to be with a Sharpie because they were cool, they’d get their hair cut and their be tough, and they fought and fucked—as they’d say.” And although she admitted that “Women didn’t really fair too well” in the gangs, she’s quick to note that “There was an overall misogyny across society as a whole at the time, young guys felt they had more rights over the women.”

Speaking to Rebecca and Marcus, they paint a more complex picture of the teenagers we’ve come to idolise. Remembering the boys she was friends with Rebecca reflects, “These kids were lost, guys were homeless, they were living on the streets. Certainly when you are being violent, or have been violated, coming from a family culture of violence you’re more likely to perpetrate violence.” But while their introduction to violence may have often been as victims themselves, it doesn’t excuse why we’re so quick to wash away the shadow of sexual assault that was clearly present.

Photos like the now famous Vale Street have come to represent what Kathy Drayton, the director of Girl In A Mirror, described as a “brash sexuality of Australian youth in the 70s”. And there is no doubt that Carol presented these boys as sensual beings on purpose. She lured them to take off their shirts for photos, and bribed them to act as subjects by buying them beer. But lurking in the background of her images is a menacing presence.

Rebecca defends her friends, speaking of Carol she remembers, “There was an edge of violence, and she sort of rode that a bit for her art. She went out into the bush with these guys, and they weren’t necessarily well adjusted people.” She suggests that the boys were encouraged by the attention, “with a lot of those guys—there was a real edge of violence—they didn’t know how to be with women. Women with independence, and I think they thought, oh we’re probably going to get a root.”

But whether the images were of threatening young men—disenfranchised, bruised, acting out, and using women as another stage their cycle of violence and self destruction—the fact remains that we’re very quick to not look deeper. Certainly some were violent, others were the victims of violence, but neither conversation is broached in our narrow fixation and celebration of their cool style.

You only need to read Puberty Blues to be reminded of the rampant misogyny and casual sexual violence that was embedded in adolescent subcultures of the time. But when we think of surfer we do remember panel vans and tubs of Vaseline. Sharpies conjure Youtube clips of gawky dancing and flattering knits.

When pressed, the slivers of something more sinister do appear. Marcus admits, “I’m sure violence and degradation of women did take place, there was plenty of objectification of women,” but it’s lingers in the background of conversations, like the boys in the Vale Street.