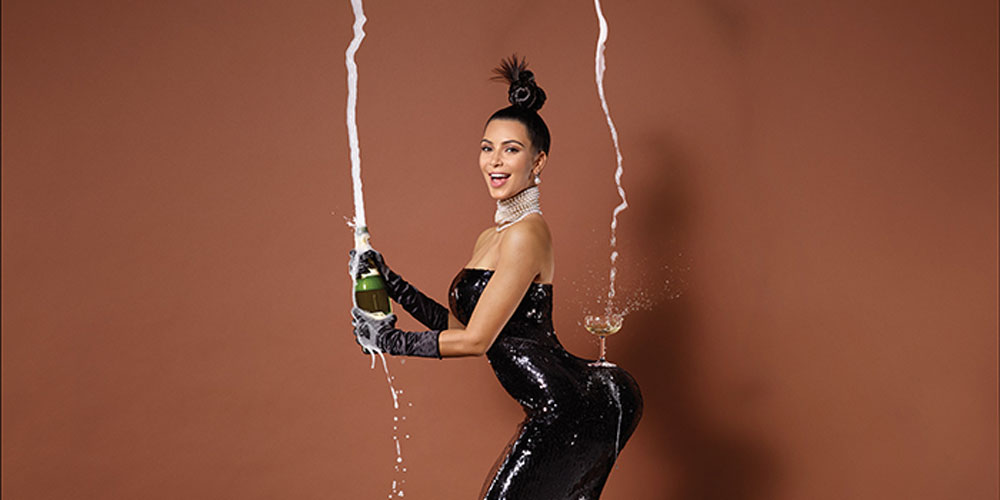 I don’t know if you’ve heard, but Kim Kardashian showed her buttocks (along with some other bits) to the world last week. On a very superficial level, as part of the large-derriered brethren, I was thrilled to see big bums continue their reign as the fashion item of the past year. Big bums have had their white undersides flashed to the world in recent times thanks to buttock pioneers such as J Lo, so K’s ‘breaking’ of the internet using only her greasy backside are definitive proof that bums are the new Birken bag.  Booty, by the aforementioned J. Lo feat Iggy Azalea and of course Nicki Minaj’s Anaconda show that a woman’s glistening anus is only ever a thin strip of lycra thread away from being exposed.  (Sidenote: When did everyone’s bums get so shiny?  There is an oil-slick worth of Vaseline, enough to kill every seal in the world, being used in these videos and photos. Do people like that? I just look at it and think of all the stained towels.)

Another KK, Keira Knightley also bared all last week, going topless for Interview magazine on the proviso that the pictures remain unphotoshopped to show that woman’s bodies “are a battleground”. I found her logic a little hard to understand, because while it was oddly reassuring to see that she, like so many women, has slightly lopsided boobs, I don’t quite follow how showing her boobs would have the media shaking in fear from this blow against them in their ongoing exploitation of women’s bodies.

Like the champagne leaping into the glass on her ass, Kim’s thought trajectory is much easier to follow – she knows people talk about her bum, her brand is based on getting people talking about her, ergo if she shows her bum the sound of mouses clicking will be deafening and her brand shoots ever further into the stratosphere. I’m not a huge fan of what she is selling, but you have to admire that she damn well gets results.

Why is it that Keira is hailed as a social-protestor, while Kim is called a slut and a bad mother? Is it because Keira is an actress of merit and Kim is often mocked for having no skills beyond displaying her body? Again, the logic loses me – so nudity is okay as long as you also have a day job? Or is it because Keira is thin and Kim is rounded? Thinness is associated with chicness and high culture whereas big boobs and bums are somehow relegated to low-culture, to the wearers of Juicy Couture tracksuits and stars of music videos.  Also Keira has a posh accent while Kim is New World new money, and this class divide seems to immediately render Keira’s photo art and Kim’s porn.

Despite Keira’s no-photoshop rule she’s still heavily styled, made-up and carefully lit and she looks beautiful. Kim is obviously using all of these tools and a couple more, so neither woman could be accused of looking natural, and while some have mocked Keira for showing off her body and attempting to label it as protest, she still doesn’t have a bucket of whore dumped on her by the internet the way Kim does.

Both Kim and Keira seem, through their heavily PR’d existence, to be perfectly nice women. I would absolutely have a pint with either of them, should they ask me. Of course I’d rather see them competing for headlines for their efforts in fundraising for charity or Nobel Prize nominations, but that shit is never gonna be clickbait, unless they complete the ice bucket challenge in their birthday suits. Sadly that’s just the world we live in, and I don’t accept it but I understand it. I am completely baffled though while one woman’s nudity attracts judgement and ire while another’s is seen as feminist demonstration. There’s nothing wrong with the female form, but what’s wrong and creepy is the categorisation and perception of it.

If you’re anything like us you have a giant soft spot for long read articles, you know the type: I was a transexual midwest…