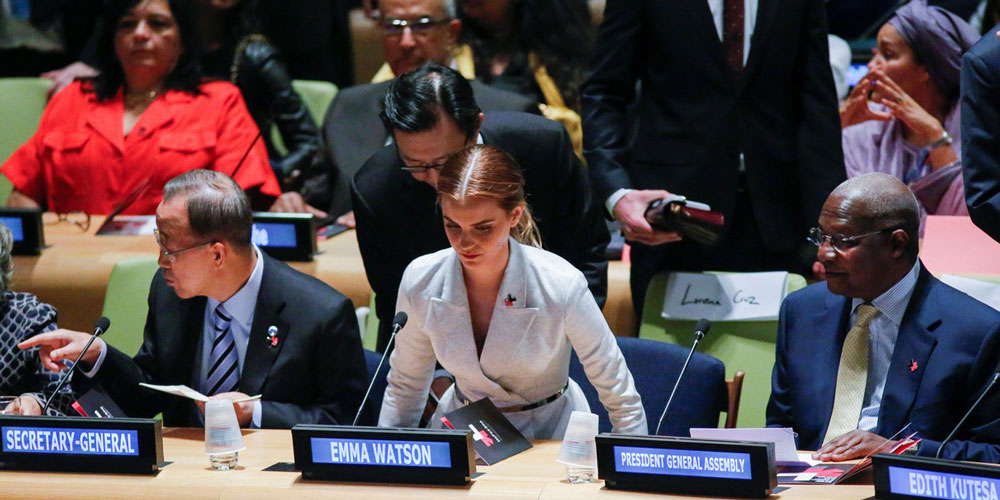 This week Emma Watson took the stage at the UN to speak about gender equality and how the global HeForShe campaign aims to engage 100,000 men and boys to fight for equal rights for men and women around the world. That sentence is pretty water tight when it comes to laying into someone—in fact Watson’s performance as a freshly minted Women’s Goodwill Ambassador is pretty hard to fault. But like so often happens after an event gets a lot of press a slow backlash has been creeping in. Surprisingly it’s not from men, but from women, educated engaged women who themselves care about and speak out for gender rights.

This crux of the issue that has been voice by writers like Clementine Ford is that the praise heaped on Watson is disproportionate to the message, and what she’s saying is not only not new but also arguably toothless. They feel that feminism is a woman’s issue and the focus being placed on men is too large.

I can understand the frustration of Ford and the many women who have backed her up in that it can be a bit of an eye roll when the world needs a celebrity to state the obvious for someone to listen—but I don’t think we should dismiss the message. Emma Watson is a rich white woman with a globally recognised name, and obviously there are countless women who have fought longer and harder than her for the female cause. But there will always be someone more qualified to speak. As I write this there are countless women better equipped to write this article, but it doesn’t mean I should turn off my laptop. Every voice is valid, and the reality is that as much as we wish social workers and doctors were international heroes, as of right now they’re not.

Maybe Watson’s voice isn’t the clearest, but right now it’s the loudest, and we shouldn’t baulk at having it speaking for our gender. This issue needs the loud voices because they’re the ones to get the attention that can help the unsung heros do their jobs and spread their message. Feminism has come a long way, but I hardly think we’re in a position to say we don’t want the attention someone like Watson can bring just because she doesn’t have PHD in gender studies.

The second issue is more complex, and it touches on the place men play in feminism. I’ve spoken about this on the blog before and I’ll say it again. Feminism isn’t a women’s issue, it’s a human issue. It doesn’t only affect women. We’re the mothers, friends, sisters, and daughters, and our lives and actions have an impact beyond our X-chromosome. Women’s education can liberate whole communities, break down poverty cycles and disrupts generations of violence. And the fight for this equality is a lot easier if we call men to educate and arm themselves with information and discussion too.

Feminism does tend to move cyclically, from suffragettes to our bra burning mothers and grandmothers, and in the past it did draw a clearer line between being a male and a female issue. Women didn’t actively seek men to join their cause because they were doing it for themselves by themselves. But the reality is that when those women succeeded they brought the issue into the mainstream where to carry it home we need to be inclusive in our vision. For anything to become common place, and we often talk about feminism succeeding when it’s a non issue, it needs to be a global, universal priority. One taught by fathers to sons, in boys schools, and reinforced at work and home. Women can fight as hard as they want, but we’ll get a lot more done if there is less to fight against.

Sometimes when I write on this blog I worry if I sound preachy, if I too loudly condemn an opinion only to lay my own in its place. So to be clear I want to say I don’t cut down the women who have spoken on this topic with a different perspective. Because as always, anytime where every major news outlet is speaking about women’s issues I’d consider it a victory. And for that we should feel something in itself has been achieved. Rather my point is one I return to again and again: there is no right or wrong way to be a feminist. Everyone needs to find their own way to make it work in their own lives and communicate their message in their community. When we start looking at a cultural moment like Emma Watson’s speech and saying it isn’t exactly what we wanted we lessen its impact and fracture our whole voice.

With so much of the world already working against women in issues around education, health care, reproductive rights, and freedom of speech we can’t waste our voices fighting with each other.