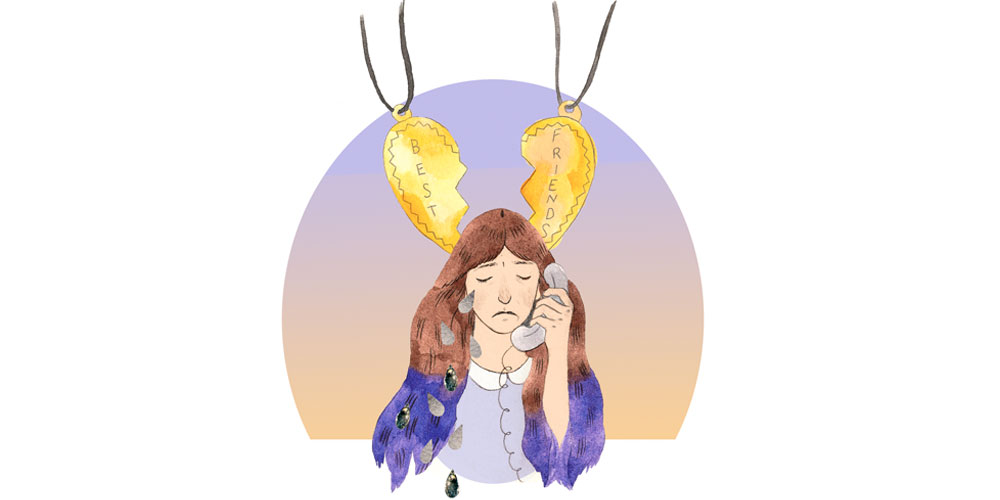 Why do we allow the women we love to treat us so much worse than the men?

Breaking up is hard. Telling your boyfriend he needs to stop driving by your house every 12 minutes is also tough. But the thing about break ups is the really shit ones aren’t romantic in origin—they’re with your buddies. And anyone who thinks getting Facebook divorced sucks should try being dumped by a friend.

I have a friend who spins me around far more than any dude ever has. It’s not the countless unanswered texts, stand ups, and radio silences that kill me; it’s that I take it. If she were a boy I would have deleted her number years ago. But after countless friend faux pas I continue to take her back. She has me wrapped more tightly around her finger than any handsome stranger ever did.

When I think about it, relationships with distant mates aren’t that different to destructive flings. They’re always the ones you come back to you just as you were about to right them off. They usually also return with a million excuses, a lot of kind words, and all the charisma that kept you waiting so long in the first place.  And for that brief make up period it’s hard to remember why you ever felt hard done by in the first place.

But inevitably they once again stop calling, stop answering, and disappear into the abyss with all the practiced ease you forgot about. But why do we allow the women we love to treat us so much worse than the men?

It’s a hard question, and everyone’s answer will be different; but there are broad similarities between all bad female relationships. Firstly we’re not conditioned to give up on friends. Well, hopefully we’re not. From when we’re young our post feminist mothers taught us, “Chicks before dicks”—maybe I’m paraphrasing—but we were instructed to support the sisterhood. If a man treats you badly you walk away, but if a woman does us wrong we’re told to wait it out, work for it, and sort it out. But what if she doesn’t want to? What if some people aren’t worth as much of your time as you thought?

This brings us to the second and probably most telling issue with getting dumped by a friend. When a partner leaves you there are a lot of things you can tell yourself to ease the sting: they have their own problems, they don’t know a good thing when they see it, they’ll have regrets. Because when dealing with romance we put up a wall between our true self and our relationship self—you can deny it all you want, but very few people are lucky enough to meld the two. In fact, if you’re the exact same person with your partner as you are with your friends then you probably won’t be worrying about break ups anytime soon.

When we separate ourselves we also allow a certain level of protection, if it doesn’t work out there is a voice that knows they fell out with relationship you. The you that wears heels, doesn’t swallow your gum, and probably has never used the toilet. But when a friend decides to not call there’s nowhere it hide. We show our whole selves to our friends, we give them everything, and lay it all out on the judgment table. We do it so when they (hopefully) accept us fully we know that it’s real. We can assure ourselves that this person has seen everything there is and they still love me. It’s a strange kind of validation, and right or wrong, it means the world.

But when friends break up, or if you’re unlucky, get dumped; they’re dumping the whole of you. They’re not leaving behind the girl you take to parties, but the one you keep at your house with your teenage diary and comfortable t-shirts.

The understanding women have among themselves is one of the most incredible things you could ever be lucky enough to partake in. But when it goes sour it can break your heart. Being friend dumped is having someone look at you and say: I understand you, I see you, I know you—and I’ll leave you.

When we invite people into our lives and accept invitations into theirs, we open ourselves up to a whole range of emotions and experiences that would give most boys nose bleeds. But we also put each other in incredibly fragile situations we don’t always understand. The truth is you probably mean more to more people that you realize, so be careful when you treat your mates like shit. It hurts worse than you know.

Maria Angelico’s New Show Will Make You Laugh and Move

In her new web series Movement, writer and actress Maria Angelico explores familiar themes around reconciling yourself with adulthood. Protagonist Sophia is a self…