It hardly needs mentioning that this hasn’t been a glowing year for Australian politics. More so than ever we’ve seen ourselves slide into becoming an ignorant backwater marred by racism, sexism, homophobia and ignorance. But this week the county’s failings have been on full display in the media surrounding the constant, and often ill informed, debate over burqas in public.

Before we move any further I think it’s important to first clear up what a burqa actually is. Although it’s often used as a general term for any religious head covering it is in fact a very specific garment and almost definitely not what most bigots refer to when they spit hatred over them. In almost all cases they’re actually talking about dupatta. The constant inability to even get the term right shows the compounded cultural ignorance before the conversation even started. In fact if you find yourself speaking to someone about the issues surrounding them and they don’t know what hijab is you should prepare yourself for a pretty painful conversation. 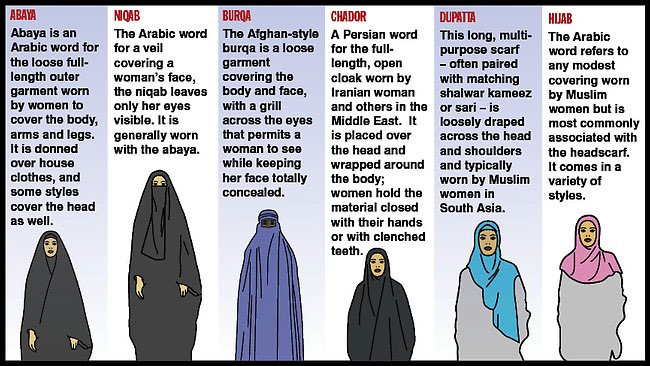 Although the issue is depressing, and intimidating for many women, it had been easy to assume is was one confined to the ignorant and misinformed. That was until Tony Abbott, who to be fair is depressingly ignorant and misinformed, spoke out yesterday in support of banning the burqa. In the past the PM’s senior advisor Peta Credlin and South Australian senator Cory Bernardi had spoken out against the garment, but with Bernardi in particular playing the role of the dementing grandfather of Australian politics there was at least hope the ridiculous issue would remain on the fringe. But with the PM’s comments that the garment was a, “fairly confronting form of attire and frankly I wish it weren’t worn”, and parliament expected to decide on a possible ban next week, the preferred catch cry of idiots, “”ban the burqa”, is now a frighteningly real possibility.

Earlier in the week the subject was being explored in a different, although comparably ignorant way, in Tanya Smart’s Daily Telegraph article: Life under the Muslim veil: Our reporter’s day shrouded and afraid on familiar streets. Before we even begin, speaking as a journalist that angle is so played out it would be laughable if it wasn’t so offensive. To assume you can understand someone’s worldview by wearing their clothes for a day is primary school level political thinking. But what was more troubling was the writer’s leanings from an experiment that although ill-advised could have been well meaning.

Rather than, oh I don’t know, speaking to a Muslim woman to understand her point of view. She makes it completely about the Western experience, focusing on the threat and terror she feels and assumes that all women who grew up with the garment must feel the same way. Like many of her forehead slapingly simple conclusions, she took the burqa off and felt better so obviously all women would experience the same relief if they followed suit. Again, she didn’t think to ask any herself.

The article makes one interesting point, albeit accidentally, so much of our experience of the garment is seeing it from a Western (often male) perspective. It seems foreign to (some of) us so, it intimidates (some of) us, it confuses (some of) us—so obviously everyone wearing one is mirroring our emotions.

Our fixation on it as a security threat only compounds the issue—it’s obsessing over the consequences the garments have on our own lives and fears. To take a moment to consider it from another perspective completely skews the issue.

Firstly, and thankfully increasingly publically, the issue of freedom of choice is raised. Even Tony Abbott concluded that “”We are free country, we are a free society and it’s not the business of government to tell people what they should and shouldn’t wear.” But if we’re obsessed with the idea of security and a threat we’re blind to not see who the real villains are.

As Australia’s racial discrimination commissioner Tim Soutphommasane pointed out this morning in his interview on ABC News Breakfast, there are no reported cases of terror or crime in Australia carried out by someone wearing a burqa or using any Muslim head covering to cover someone’s face of obscure their identity.

This constant fear that they’re somehow a threat to us is unfounded. In comparison though, the rates of women wearing head coverings being abused by Australians is the real threat that should be dominating our headlines. It’s ironic to think that a country that is so obsessed with terror threats is still so blasé to violence against women, but this issue is just another example of the injustice in that. Just like we so often hear of the 116 Australian’s have lost their lives because of a ‘terrorist’ act in the last 36 years but not the 56 Australian women who are killed annually through acts of domestic abuse, it seems like dealing with the people who are really being threated isn’t newsworthy enough.

Although many women are speaking out through amazing campaigns like Women in Solidarity with Hijabs the focus is still largely skewed.

The fight against head coverings ultimately isn’t with the women who wear them, it’s with the people who feel it’s a licence to abuse and berate said women. Like with so many things in the past 12-months, the real villains are in front of us, their faces are uncovered and they have Australian accents.

Why do people even buy fruit? Don’t our generation and social demographic mean we get all our nutritious needs from super-food croissants or something…