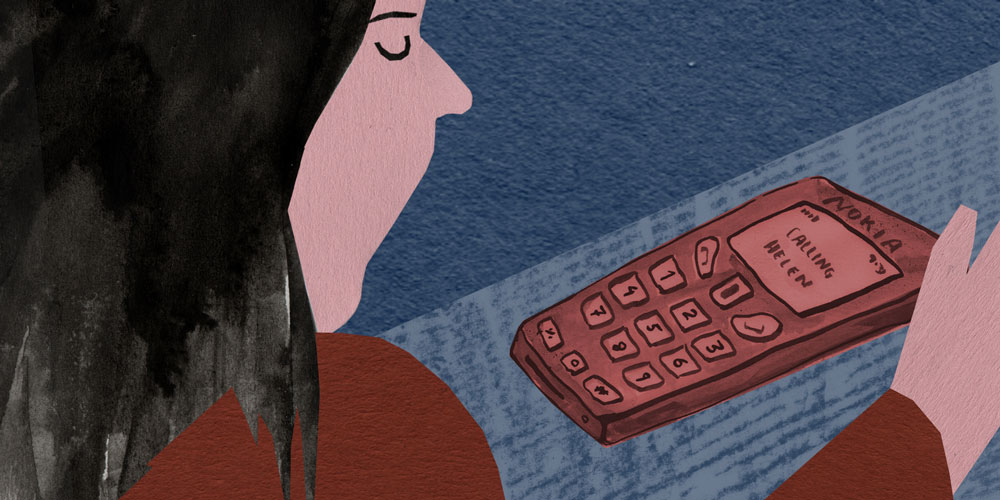 Helen is the last in our series of  short pieces by Ella Mittas on gossip. We’ve been so lucky to be able to publish her work here, and also couple them with original Molly Dyson illustrations. Watch those two names, you saw them here first.

Mary looked at where the chairs had worn away at the lino. The Coles break-room was beyond repair. She watched Karen by the hot water tap, stirring the cups of Nescafe.

‘Helen’s had a string of boyfriends that she’s met down at the pub. She’s probably fucked off with one of them again.’ She’d tried to call her sister four times already on this break alone.

‘One of the first ones, he was living with his mum when Helen was still living at home. Tell you what, a match made in bloody heaven.  He’d ride his bike over to take her to the pub because he’d had his license taken off him. Then she rings me one day and says the local cops had taken his bike, for trying to ride it when he was too pissed.’

‘And he was one of the better ones. After him there was Darrel.’ Mary shook her head. ‘Helen showed up with him at Christmas one year, out of the blue. We hadn’t seen her for ages let alone heard about this new guy. Anyway, he’d brought all these crayfish. I said to him “look you really shouldn’t have” and he goes “well, they fell off the back of a boat, if you know what I mean,’’’ she took a sip of her coffee. ‘You could tell something wasn’t right with him, he looked a bit off.  He looked depressed actually. I said to her “Jesus Helen, where’d you find him?” She just spun some story about how romantic it’d all been when they’d met. She was so bloody mental she couldn’t see there was something wrong with the guy. That day he said to me, as they were leaving, “you have a beautiful family.” Let me tell you, I couldn’t have been happier he was getting the hell out of my house.

A couple of months later, Helen shows up on our doorstep. He’d done a real number on her. It looked like he’d broken her fucking jaw. Well, that was just the beginning. She said to me, “listen Mary, I’m in a bit of trouble.” I said, “no shit” and she said, “no, I’ve lent Darrel all this money.” He owed money to all these people, you see, and he’d pissed off.  Now there were people coming round looking for him, threatening her, and she didn’t know what to do.’

‘What could I do? I lent her the money.’

‘God, you shouldn’t of done that.’

Mary sighed. ‘Well, what do you think happened?’ Karen shrugged.

‘She disappeared again. We found out later that he’d had all these problems with gambling. He’d tried to neck himself when his wife left him, after they had to sell their house. Just an all-over bad scene.’ Mary looked into her lap, her white apron was so worn out she could almost see through it.

‘And what’s happened with her kid?’

‘Who Helen’s? They’re with her ex. She’s not allowed to see her. We’ve never found out why. I can’t even imagine what happened to that girl, they don’t take a kid off you for nothing, you know?’

Karen nodded. ‘Must’ve been something bad.’

‘Helen was so normal up until about secondary school. I don’t know what happened to her. She was always trying to get into groups, I remember that much. Rich, my brother, reckoned something happened with a big group of boys, but he never confirmed it. And she never said nothing, so we never chased it up. I do try with her, but she makes it hard.  She just keeps fucking up. Every time Mum takes her back, but now Mum’s broke.’

‘Hey, we’d better go back. I don’t want Nathan to get the shits with us again.’ Karen stood up.

‘Yeah, sure.’ Mary said, looking into her empty mug. Over the speaker-system adds were playing; down, down prices are down. Mary picked up her phone, she’d better try her one more time.