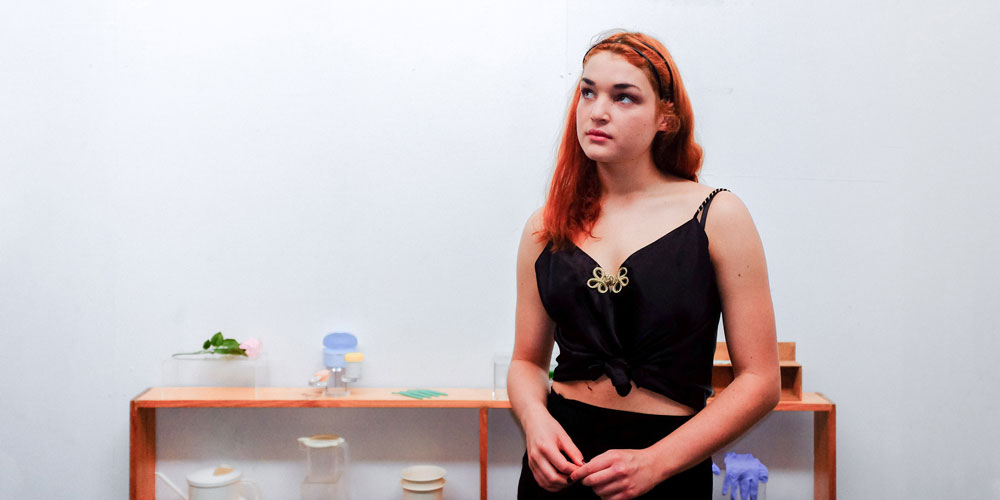 Myspace is our new series where we explore the creative spaces of the people we admire, and look at how we shape our surroundings while they inform our work.

We like to think of Phebe Schmidt as Queen of the Melbourne look-book. Her perfectly hyper-realistic, candy hued still lives have infiltrated the worlds of labels such as Kuwaii, Per-Tim, and Renée Farina. In her own work she explores the artificial world of beauty and consumerism with a pitch so perfect her subjects take on the plastic sheen of beautiful, man made things. She examines appearances, sex, consumerism in such a charming way you can’t help but feel a little proud of belonging to the plastic world she photographs.

For someone who loves fake, she’s as natural and unaffected as one can be. And her light-flooded, multi level studio/home is as dreamy as she is. Thanks for the tour Phebe!

GGG: So how long have you been in your space for?
Phebe: Since last November.

Did you always plan to live here?
No but at the moment it’s convenient and I have enough space to live and work. 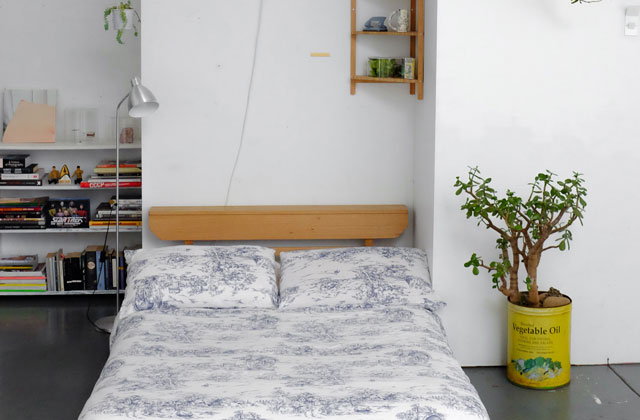 Is it something you’d recommend?
Yeah I would totally recommend it, sometimes it does have negative attributes—putting off an early product shoot because you want to stay in bed.

At least there’s a lot of incentive to keep your space tidy.
Yeah it’s probably the tidiest I’ve been in all the houses I’ve lived in because it’s kind of hard not to be.

Is it strange having clients in your bedroom?
Yes sometimes, that’s why I try and keep it as minimal as possible. I was thinking of putting my bed up in the loft, to make it a little less bedroom like. What’s your favourite thing about this space?
Probably the light, it’s just really nice to wake up to streaming natural light. And it makes it easy to wake up.

Since you moved, having not only the beautiful light but also the freedom of your own studio, has the space changed your work?
Yeah in a way, I have more time to think about shoots when I’m shooting without the client there, and I can take my time to rearrange the space for each job. There’s no time frame where I feel I need to rush, it’s just less stressful. I can take my time. You’ve got a bit of a reputation as “queen of the look books” are you at a point where you can live on your photography, or do you still balance it with other jobs?
I still work two days a week, more as a safety net because I’m paranoid about not being able to keep this space if I don’t get enough work in a month. Also I like to not take on a huge amount of client based jobs at a time, I also want to do some personal work and spend enough time on a job so that i feel good about it when it’s done.

Your favourite feature here is the light, do you have a favourite object?
Probably the Star Trek paraphernalia, I’m obsessed with Star Trek.  I have had to hide some of my things up in the loft because I didn’t want clients to get freaked out. I hide the huge poster of Kirk and Spock up there, and the Spock bust. So you have a secret shrine?
I did, I just try and contain it as much as possible so I don’t look insane.

Old or new Star Trek?
I’ve got a lot of nostalgia associated with the original series because that’s what I started on, but I’d say my favourite would be Next Generation.

You’ve got a pretty distinct style, how did you arrive at it?
I think it’s a number of things, when I was brought up my parents always had great taste in movies, and that influenced me a lot. We watched a lot of Cronenberg, and a lot of good sci-fi: I think the colours in Star Trek, especially the originals with the pastels and reds and strong blues influenced me. I can’t really think of a specific time when I thought, this is my style. but rather a few things happened . 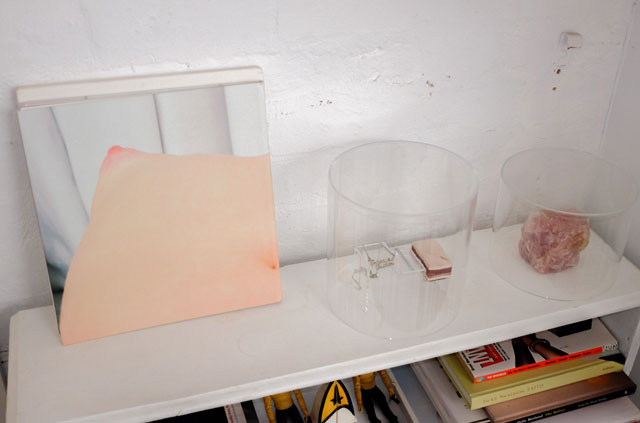 What camera do you use?
I only use one camera, a Nikon D800. It’s a full frame camera and it just gives me enough information so that I can play with the image as much as I want in Photoshop.

Do you have any secret weapons?
I always tether, which I think helps me more than anything because I know that if I’m shooting with a client I know they’re happy and can change things as we go as opposed to just looking at the back of the camera. It saves a lot of time in editing. Also I’ll generally overshoot, which I know is a trap with digital photography, but I’ll make sure I’ve got everything from every angle just in case. 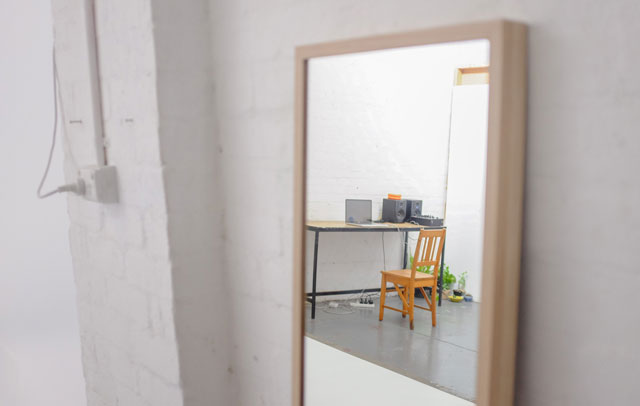 Other than your camera, is there anything you couldn’t shoot without?
Probably music, I enjoy shooting with music, especially disco—it feel it’s very uplifting. And if you have models, it’s awkwardly quiet without it.

Do you have a specific highlight of your work so far that was particularly special to you?
I’d probably say shooting the Kuwaii shoes recently, it was my most recent shoot so I don’t hate it yet. But also because I enjoyed the creative freedom they gave me with choosing props and colour schemes. They’re great. 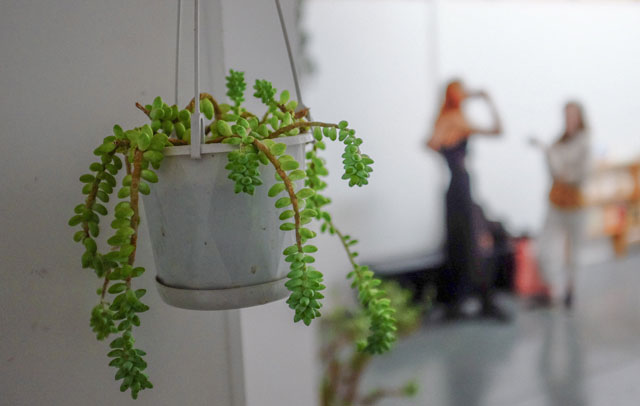 You shot Per-Tim (Laura Barton of Kuwaii’s other project with Bernadette Francis) too right?
Yeah I did.

When you look back on Australian fashion you do see distinct creative communities, and I feel like we’re kind of seeing this tribe begin to form between designers and artists as people really invest in their look books, and press shots, and the collaborations they take part in.
Yeah totally, totally—I really love those guys. I’ll be doing their portrait soon so that’ll be fun. 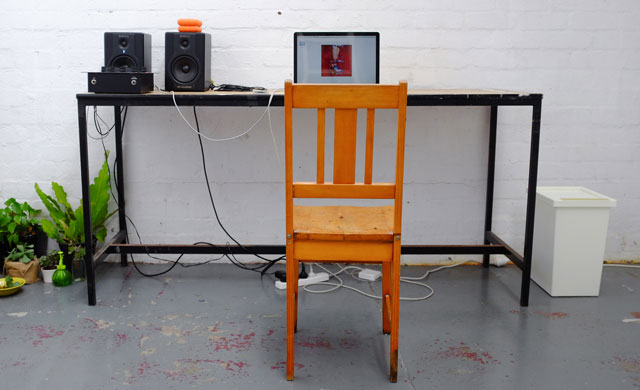 What else is on for the rest of the year?
I should be hearing this week about an exhibition later this year in Berlin, at a gallery that specialises in Australian and New Zealand photography. And I’m going to Japan in May, just for two weeks. Which will be amazing.

For a holiday or work?
For a holiday, but I imagine I will be pretty inspired. I’ll try not to come back with too many things. I was going to do my honours this year but I deferred because I want to spend some time on my own work.

Thanks for having us!

The Life Changing Act of Shaving Your Head

In the weeks before my hair went I tried a little mental preparation tactic.  I’d wait for someone to tell me, in adoring detail,…