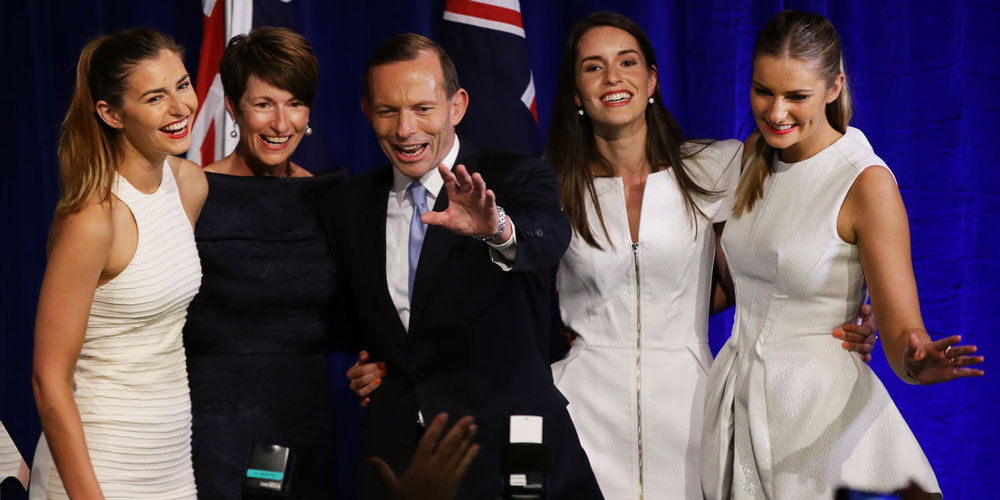 Yesterday Tony Abbott stood up at the International Women’s day breakfast and proudly announced that his cluster of gentle daughters made him a feminist. Which is very sweet, if you don’t question what his attitude towards women were before he started making his own. At the breakfast he addressed the fact that it took the fruit of his Lycra clad loins to bring him around, saying: “And it is true that my views on policy towards women have changed and evolved in response to watching friends of mine, watching colleagues of mine and in particular looking at my daughters grow up and thinking what would I want for them?”

The Prime Minister has a habit of using his familiar relations to soften some of the rougher edges of his policies: he supports his sister Christine Forster in her lesbian relationships, but won’t politically back same-sex marriage; and his aforementioned “Tony’s Angels” often flank him when his comments on abortion or RU486 are ringing particularly loudly in people’s ears. He just needs to mention how he totally has heaps of black friends and we can pretty much put the immigration debate to bed.

To be fair the Prime Minister’s Women’s Day speech wasn’t the first time he’s tried to distance himself from his “woman problem”.  When elected he was quick to announce he would be personally responsible for women’s policies. It was easy to scoff at the decision, and many eyes were rolled as it was suggested it was a PR friendly way to more closely control issues surrounding women’s rights. But he assured us his intentions were pure by saying, “This will ensure that these key whole-of-government priorities are at the centre of government.” And to be fair, he did kick things off with a Paid Parental Leave Scheme that was progressive by any standards.

But despite a handful of political moves, we do keep returning to the question: Is Tony Abbott a feminist? The misogynist title has stuck, some could argue unfairly, but it’s undeniably an issue that women continue to return to despite his best efforts to assure us he’s no longer the man who in the 1970s infamously said, “I think it would be folly to expect that women will ever dominate or even approach equal representation in a large number of areas simply because their aptitudes, abilities and interests are different for physiological reasons.”

Over the past 12 month Tony Abbott has shown a surprising ability to move easily in topics surrounding equality in the work place and equal pay, but continues to falter when the issue becomes more muddied. It’s easy to be on a woman’s side when she’s trying to find away to spend more time with her kids, the Paid Parental Leave Scheme is undoubtedly generous, but it’s still feeding into an image of family life prescribed by the Prime Minister.

When women have made moves to break away from a white bread existence—same-sex marriage, the morning after pill— the glass ceiling looks much further away. The much discussed Paid Parental Leave Scheme is often brought out as a glittering conversation show piece, but child care remains a dusty issue. Want to stay home with your kids? Enjoy your full salary for six months. But opt for childcare and your options are less easy-bake-oven. The Liberal government has proposed HECS-style loans to assist in the cost of mum’s getting back to work. In short this means that rather than assisting or subsidising childcare, women may be forced into debt.

The Abbott government further aggravated the debate by floating the idea of allowing three-year visas to foreign nannies as a childcare solution—risking the creation of what Labor called a new working “underclass”. Not to mention further testing existing economic divides by effectively suggesting private au pairs as an alternative to affordable government supported childcare.

Of course this all relates to woman in a situation to have children in the first place. Before he was even elected Tony Abbott ruled out any amendments to Australia’s abortion laws, and as the Federal Health Minister he fought to restrict access to the morning-after pill by making it an over the counter medication. More recently he even went as far as unfortunately describing termination as the, “easy way out”.

When Tony Abbot called himself a feminist it might  have been genuine statement. The cracks in the issues aren’t about whether he cares about women or not, they’re rather about how he sees them. In his address yesterday he spoke about the opportunities women in Australia have, but what he was referring to were the opportunities women in Tony Abbot’s Australia have. When talking about his own daughter’s bright futures he said, “Now, they are growing up in Australia and, regardless of your circumstances, Australia is the best country in the world for everything.” And he’s right, assuming you’re not homosexual, an immigrant, disabled, a low-income earner, a single parent, or not white. Australia is a great place to be a woman—if you’re one of Tony Abbot’s daughters.

For some parts of Australia it’s a long weekend, so it’s the perfect time to curl up, settle down and pump your brain full…