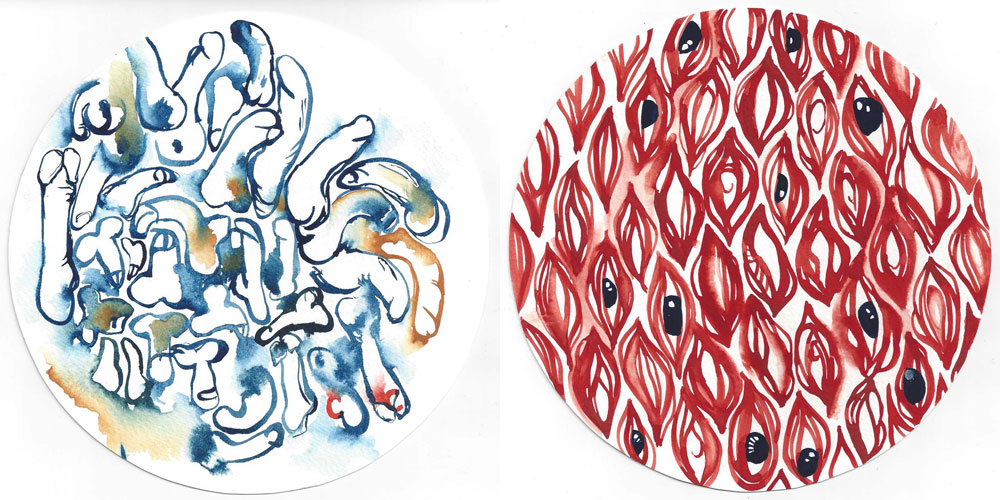 Laura Windvogel is a South African woman who likes to talk about sex. In most countries that makes for a good dinner companion, but in AIDS ravaged SA a frank attitude towards sex can be life changing. As a working artist she explores sexuality and health through her Lady $kollie blog, celebratory vagina inspired water colours, and now a fresh zine project. We’re really pleased to introduce you to her.

Most people love to talk about sex. It’s usually just a matter of coaxing it out of them. Liquor helps. I’ve often found one beer is enough to lure a seemingly conservative friend out of their repressed shell. We sometimes talk of recent hook-ups, who’s dating and who is doing who.

I listen to my friends’ escapades with genuine interest. I find a friend’s sexual history as important as their parental heritage or professional background. Your sexual history moulds your personality and personal relationships just as much as where you grew up.

And so the Lady Skollie blog was born. As most 19-35 year olds, I started a blog to showcase some of my slightly offensive watercolours and film photography. It was a place where I could blow off the post traumatic stress procured from attending a reputable fine art school in Cape Town.

After toying with the idea of starting an occasional sex column on Lady Skollie, Kaapstad Kinsey came into existence. I organised informal focus groups, inviting friends over, getting drunk, talking about sex and realising that there was indeed a market for Kaapstad Kinsey. Once people start talking about sex, they rarely stop. I sent out a call for submissions, listing five seemingly simple questions related to sex and sexual history. Within an hour I was wading through pages of stories. Initial planning stipulated I’d release one submission per week accompanied by a watercolour doodle—but it was decided this would weaken the impact of the submissions.

I read brave, outspoken and frank accounts; sex stories that made me gag, made me cringe, and most enjoyably, made me laughed so hard I cried. This was a platform where people were letting me inside little corners of memory they had very nearly forgotten. They took me through the bizarre, sometimes nauseating feelings of seeing genitals for the first time, the curiosity of childhood and the sickening feeling of loving so deeply even though you are only 12.

In a country like South Africa we can no longer afford to maintain the governmental approach to HIV/Aids and sex education. South Africa has the highest rape statistics in the world, domestic abuse rife in many impoverished households. Girls as young as 12 become pregnant and we have to recognise the fact that we are facing a national crisis that can only be rectified with education.

I put out a call to artists, DJ’s, graphic designers, filmmakers, editors, photographers, and venue owners to help me organise one of the biggest projects I have ever embarked on: releasing a sex zine in conjunction with World Aids Day to promote sexual health and awareness.

As artists, we often lament the fact that we don’t make enough money or that our monetary worth is never as much as it should be. However, what we have is so much more: resources. By calling on resources available to me, meaning friends with talent and skills, I present to you Kaapstad Kinsey, a sex zine by Lady Skollie—a project that will challenge the outdated manner in which sex education has been approached. And hopefully encourage women to be more sexually assertive, men to take responsibility for themselves and their partners and approach sex as an activity that can be enjoyed but also recognised as a tool to educate.

Check out Laura’s beautiful work here. And for more information hit her up here.